The start-up received $6.6 million in investments to develop its technology and has filed several patents. 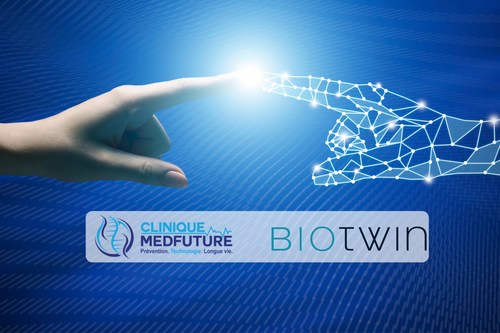 The concept of digital twins is already well established in the manufacturing, transportation and robotics fields. BioTwin aims to apply the same principle to humans and provide everyone with a digital twin, allowing for the early detection of certain cancers, obesity, heart diseases, and changes in overall health. Eventually, BioTwin’s digital twin could be used to simulate medical treatments and personalized diets.

The start-up received $6.6 million in investments to develop its technology and has filed several patents. The company recently won the Coup de Coeur award in the Innovation | Artificial Intelligence category at the ADRIQ gala.

“The investment in BioTwin was possible mainly because of the added value that Medfuture brings to BioTwin’s strategic plan,” said Mario Tremblay, CEO, Medfuture. “Digital twins are not only a revolutionary concept that Medfuture wishes to offer to its clients, but it is also an opportunity for society in general. This technology will spread globally and, in the not too distant future, digital twins for humans may be as widespread in number as mobile devices are today.”

Still in a pilot project phase, BioTwin is using the power of artificial intelligence to build digital twins using biomarkers from simple and regular samples taken at home (saliva, blood and urine) as well as biometric data captured by a smart watch and a bio-impedance scale.

BioTwin and Medfuture are currently working together on a project that will be unveiled soon and will be available to the entire Quebec population.