Lexus turbocharging IS engine for 2016 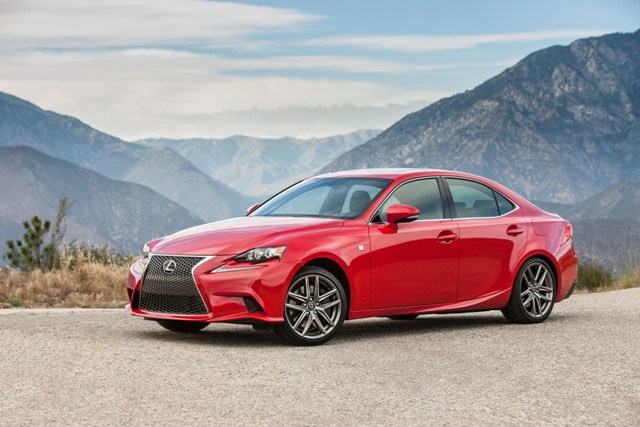 The new Lexus 2016 IS 200 will sport a 241-horsepower turbocharged four-cylinder engine. PHOTO: Lexus

TOKYO—The Lexus IS got its first turbocharged engine in 2016, making the luxury brand’s smallest and least expensive sedan more powerful and fuel efficient.

The compact IS 200t—as the new turbo model is called—carries a starting manufacturer’s suggested retail price, including destination charge, of $38,275.

Since its U.S. debut in 2000, the IS has come with V-6 and V-8 engines, even as European luxury brands such as BMW, Audi and Mercedes-Benz moved in recent years to more fuel efficient, turbocharged four-cylinders as their price leaders.

The IS’s new 241-horsepower turbocharged four-cylinder engine is considerably more powerful yet more fuel efficient than the outgoing 204-horsepower 2.5-litre V-6 engine, according to U.S. government fuel economy ratings. The old V-6 earned ratings of 21 mpg in the city and 30 mpg on highways. The new turbo is rated at 22/33 mpg.

The turbo requires premium gasoline, and while it gives the IS some real zip, it doesn’t always have the smoothness of a V-6. And the turbo, which generates 258 foot-pounds of torque starting at 1,650 rpm, is only available in the rear-wheel drive IS and is mated to an eight-speed, electronically controlled transmission.

Shoppers also can select a rear-drive IS 350 with a V-6. This model is priced $3,545 more than the turbocharged IS.

Note that the 2-litre turbo is new to the IS, but it’s not new to Lexus. It’s already used in the Lexus NX, GS and RC vehicles.

Overall, the IS continues with a “much better than average” reliability rating from Consumer Reports magazine, which is something that the BMW 3-Series and Mercedes C-Class don’t have. The 2016 IS also earned five out five stars for passenger protection in U.S. government frontal and side crash testing.

Some have criticized the IS’s exterior as fussy, pointing to all the stylized lines on its sides and its large exaggerated spindle grille. Lexus officials, though, call the styling aggressive and sporty, in keeping with the image they have for the car.

But the word “elegant” doesn’t come to mind.

The interior is functional, with nice seat materials and some notable elements.

Like other Lexus vehicles, the IS has a mouse-like controller, complete with handrest, in the centre console. The mouse is attached to the console and allows the driver to click through menus for everything from fuel economy history records to traffic alerts.

The setup is intuitive—like being at a computer—but it’s also and distracting and can draw a driver’s eyes off the road for too long while moving the mouse around.

Still, everything in the test-driven model worked well, and the usual exemplary fit and finish that Lexus has a reputation for was there.

The test-driven IS had the sporty F Sport amenities, such as paddle shifters on the steering wheel, grippy, 18-inch, summer tires, aluminum pedals and front sport seats.

The ride was firm, and steering and handling were responsive without being twitchy.

Drivers adjust the handling and ride—Eco, Normal and Sport—with a simple dial in the centre console.

A nifty feature is the sliding gauge in the instrument cluster that lets drivers tailor the information they want to see.

Road noise came through from the tires, but IS’s interior was otherwise decently quiet.

The heated and ventilated front seats were comfortable and were not overly sculpted. Back-seat passengers, however, have to contend with a hump in the middle of the floor, short seat cushions and just 32.2 inches of legroom.

Rear seatbacks fold down to expand the average-sized trunk space.