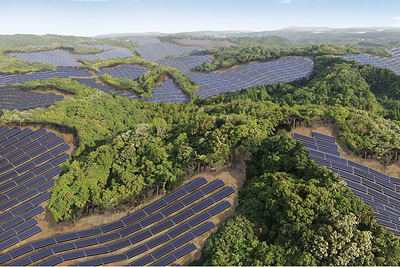 KYOTO—Japan’s Kyocera Corporation broke ground earlier this month on a project that will convert a neglected golf course in Kyoto Prefecture into a 23-megawatt solar power plant.

The project will incorporate approximately 90,000 270-kilowatt modules and is expected to commence operations in 2017. It will be the largest solar power installation in the region.

But the project outside Kyoto is not the only former Japanese golf course undergoing a retrofit.

In addition to this project, Kyocera, along with three other companies, recently announced the development of a 92-megawatt solar power plant in Kagoshima Prefecture. The site was designated for use as a golf course more than 30 years ago before being subsequently abandoned. When completed, the project will be capable of power approximately 30,000 homes.

With a surplus of golf courses and a focus on weaning itself off its heavy reliance on nuclear power by converting some generating capacity to renewable technologies, the innovative use of space may just become a trend.

The company also noted that in the United States, several cities in states such as Florida, Utah, Kansas and Minnesota are having public discussion and considering proposals on how best to repurpose closed golf courses as well. Kyocera said that overdevelopment of golf properties during the real-estate boom of the 1990s and 2000s has led to hundreds of idle courses today that are now under analysis for repurposing or redevelopment.

The company added that solar generation is a particularly productive and environmentally friendly use for defunct golf courses – as they are characterized by expansive land masses, high sun exposure, and a low concentration of shade trees.