Hydrogen not for zeppelins anymore, but element may be ready to return to the skies

Long after flaming out of the market, hydrogen is poised for a comeback 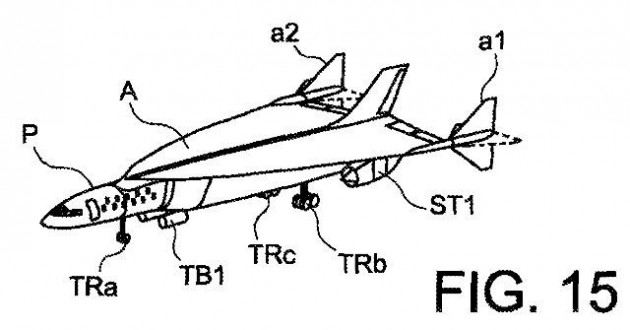 Airbus’s hydrogen-powered hypersonic plane would be capable of flying at speeds up to Mach 4.5. PHOTO: Airbus Group/U.S. Patent and Trademark Office

SANTA BARBARA, Calif—With the miraculous footage of the Hindenburg crash burned into the public memory, hydrogen has endured a long uphill battle to regain acceptance as means of transportation. Even more than 75 years later, as hydrogen fuel cell cars begin stalking the streets of cities worldwide, there is a certain reluctance about letting the small, resilient element back into the skies.

Nevertheless, the odds-defying atom at the top of the periodic table is beginning to work its way back into aeronautics.

Earlier this month, a hydrogen fuel cell UAV, or drone, took to the skies over the united Arab Emirates, the first flight of its kind in the region.

And according to Boeing Co., hydrogen fuel cells offer a clean, quiet flight. The company showed off its own hydrogen powered Fuel Cell Demonstrator Airplane back in 2008, noting its dedication to exploring innovative and affordable solutions for its aerospace customers. Though Boeing does not expect fuel cell technology to be capable of powering large commercial aircraft, it said fuel cells could potentially be used to power secondary systems on board larger aircraft.

Similarly, late last month, Airbus was also shown to be exploring the potential of hydrogen. In lieu of fuel cells, however, the company is envisioning a more combustible solution. The European aerospace company was granted a U.S. patent for a hypersonic passenger plane that would use wing-mounted ramjets to propel the aircraft at speeds up to Mach 4.5, or slightly more than 5,500 kilometers per hour. Though it only exists on paper, the next-generation Concord could fly from New York to London in an hour, or from Paris to Tokyo in less than three hours.

And this sort of research and development in hydrogen aeronautics has hydrogen producers excited by the market prospects. As the worldwide focus on cutting greenhouse gas emissions becomes more focused, the air transport industry would stand to benefit significantly from a clean, reliable source of power.

“While these technologies are not yet available, we see great potential for the use of hydrogen fuel cell technology in the aeronautics space,” Tim Young, CEO of HyperSolar, a company developing technology to make renewable hydrogen using sunlight and any source of water, including seawater and wastewater.

“These recent news events have occurred due to the global commitment to hydrogen fuel innovation spanning industries including consumer automobile, transportation, industrial, and more. It is our belief that the R [and] D efforts surrounding new hydrogen technologies will result in an increased demand for hydrogen fuel,” he added.