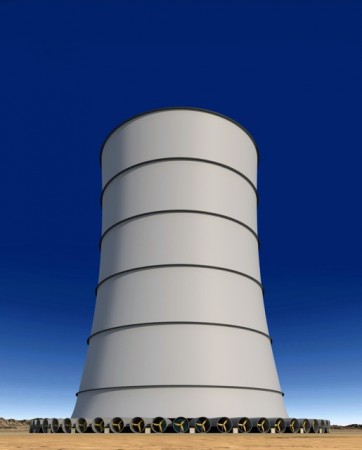 The solar wind energy tower uses a water-injection system to create a downdraft captured by turbines at the base of the tower. PHOTO: Arizona Green Power

ANNAPOLIS, Md.—The undeniable pitfall of both wind and solar energy is inconsistency. On a large scale – at least without effective storage – the technologies are a nightmare for grid operators or anyone relying on them for a sustained, steady flow of electricity. Though progress is being made on increasing the reliability of these tradition clean technologies, Solar Wind Energy Tower Inc. has been working on a renewable technology of its own that would eliminate the traditional lack of wind or sunlight pitfalls.

Unlike solar panels or wind turbines, the company’s Solar Wind Downdraft Tower would be capable of producing green energy 24 hours a day, every day, without significant daily or hourly fluctuations.

The design features a tall hollow cylinder, a water injection system near the top and wind tunnels with turbines at the base of the tower. Water is pumped through the tower’s injection system and a fine mist is cast across the opening near the top of the tower. The ejected water evaporates and is absorbed by the hot, dry air outside. As a result, the air becomes cooler and denser, and begins to fall downward through the tower. This “artificial wind” can travel through the cylinder at up to 50 kilometres per hour and powers the wind turbines at the base of the tower, producing electricity. The tower can also be constructed with “wind vanes” that capture “natural” wind and provide additional power.

The scale and production output of an individual tower depends on the environment and climate of the site it’s built. The tower that has reached the most advanced development stage has an hourly production capacity of 1,250 megawatts.

Because of the tower’s reliance on hot, dry air and a source of water, SWET has identified numerous areas where the technology would perform best. Unsurprisingly, the technology is best-suited for temperate climates where the air remains hot year-round; the company also noted the tower will produce more power in the summer months as a result of colder winter temperatures regardless of location. 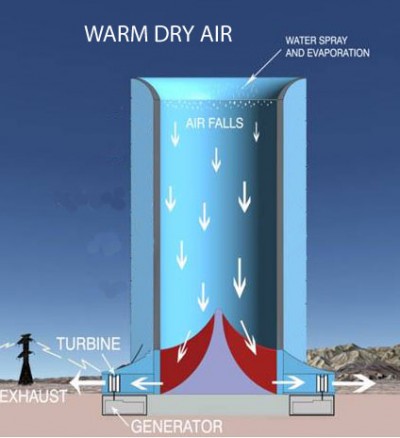 The concept currently remains paper-bound, but the Maryland-based company is actively pursuing numerous groups interested in developing a tower in Mexico and Kenya, and most notably, in the city of San Luis in the southwestern state of Arizona. Through its subsidiary, Arizona Green Power, SWET purchased 600 acres of land for the development of its first tower in San Luis last year. The company is currently securing funding to begin construction.

In other regions, the first-to-market hybrid solar wind technology company plans to license its technology to developers and earn income through royalties on power sales.

SWET noted the energy production cost for its energy tower would be similar to coal or gas fired facilities, about one-third the cost of traditional renewable technologies.