The infamous rally, which takes place every Friday the 13th in Port Dover, Ont., was the event of choice for Harley-Davidson to unleash it's latest ride 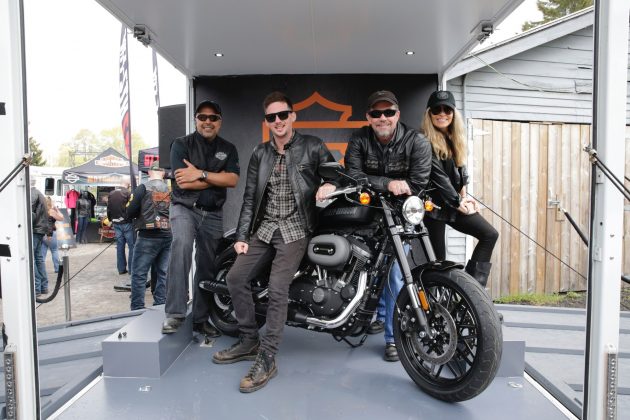 The new Roadster model joins the Dark Custom lineup with a minimalist design inspired by classic racing motorcycles and current trends in stripped-down, custom bikes and a profile reminiscent of racing Sportster motorcycles from the 1950s and 1960s.

“With 75 per cent of Canadians living in urban environments, we are thrilled to be adding the Roadster to our roster. We now offer eight city-friendly Harley-Davidson motorcycles priced under $13,000, making our line-up more accessible than ever before,” said Anoop Prakash, Managing Director, Harley-Davidson Canada. “The Roadster will be a natural fit for riding in the city, with the added performance to get out of town and experience the many epic summer events across the country, like PD13.”

The Roadster is fitted with new wheels and tires mated to premium suspension components and an air-cooled 1200cc V-Twin engine that delivers a strong pulse of mid-range torque. The 19-inch front and 18-inch rear Offset-Split 5-Spoke cast aluminum wheels were designed specifically for the Roadster and contribute to its balanced, athletic stance.

“We wanted to give the Roadster some DNA from the high-performance KHR models of the mid-50s, and later Sportsters tuned for the drag strip,” said Ben McGinley, Industrial Designer, Harley-Davidson, also on-hand for the launch. “Those bikes had fenders cut to the struts, the small fuel tank, and were stripped to their bare essentials to achieve a singular performance purpose.”

Its rider sits in an aggressive posture with a low-rise handlebar and mid-mount foot controls that center the rider’s weight over the 3.3-gallon Sportster fuel tank.

Check it out on the Harley-Davidson product page here.