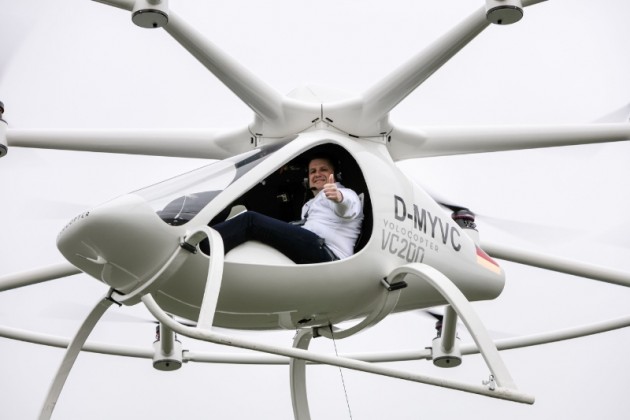 e-volo Managing Director Alexander Zosel gives thumbs up as he pilots the Volocopter at an Airfield in Southern Germany. PHOTO:PRNewsFoto/e-volo

The personal aerial vehicle uses electric propulsion that produces little noise and no emissions. The company says anyone can pilot the vehicle, and hopes it will mark the beginning of a new era in urban mobility. e-Volo says the vehicle is primed for widespread use in conventional aircraft domains, but also takes the next step towards air taxi services and air-based transportation systems.

The Volocopter VC200 received the ‘permit-to-fly’ as an ultralight aircraft from German aviation authorities in February 2016.

Its innovative flight control using a single joystick and vertical take-off and landing (VTOL) capability were designed to make the Volocopter easy to fly. The company says a comprehensive redundancy concept compensates any failure by critical components, including the loss of several motors.

Sales for the Volocopter are expected to begin in 2018.