Each of the offshore turbine's blades will be longer than a football field. An individual tower will be capable of powering a small city 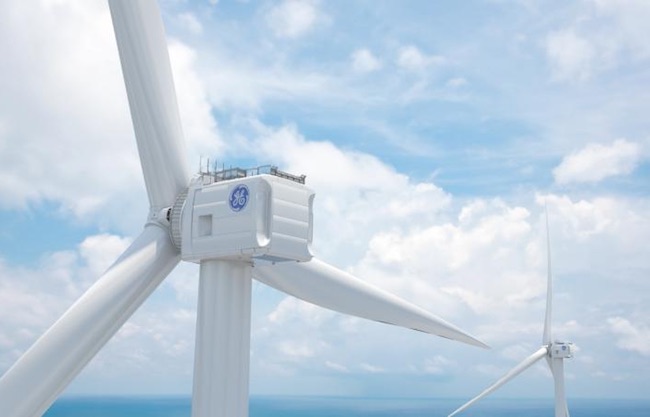 Each of the turbine’s 107-metre blades will be longer than a football field. Together, they will sweep an area of 38,000 square metres. PHOTO: GE

The U.S. conglomerate revealed blueprints March 1 for what will become the world’s largest and highest capacity offshore wind turbine.

It plans to spend $400 million to engineer, test and fine-tune its supply chain to produce the monstrous towers and blades over the next several years.

“We want to lead in the technologies that are driving the global energy transition,” John Flannery, chairman and CEO of GE, said in a statement. “Offshore wind is one of those technologies and we will bring the full resources of GE to make the Haliade-X program successful for our customers.”

GE’s new Haliade-X will stand 260 metres (853 feet) above the waves and incorporate 107-meter-long (351-feet-long) blades, each longer than a football field. The company said the blades will be designed and built by recently-acquired LM Wind Power. Engineers from the conglomerate’s other divisions, such as GE Power and GE Aviation, are also expected to contribute insight into the overall design.

Targeting a record capacity factor of 63 per cent—about 5 per cent better than the industry standard—a single Haliade-X turbine is expected to generate 67 GWh of power annually, enough to power the equivalent of about 16,000 European homes. The enormous blades will sweep an area of 38,000 square metres.

The company plans to begin testing on the first of the new turbines next year and start shipping the commercial-ready 12 MW turbines in 2021.