Researchers aim to bring large-scale solar to the high seas 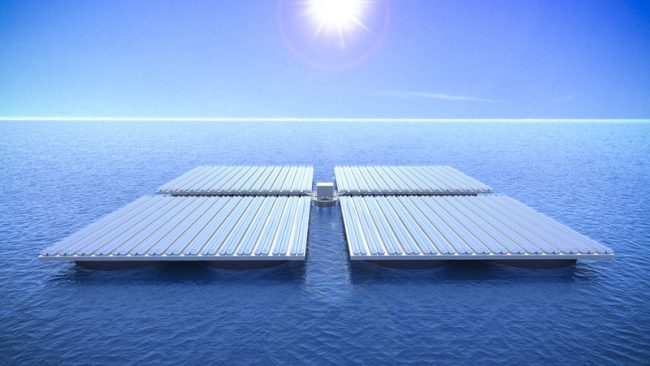 VIENNA—A clean energy startup hailing from ironically-landlocked Austria is planning to use a new technology to help solar panels get their sea legs.

Though floating solar plants have already cropped up in a number of areas, such as land-strapped Japan and the outskirts of London in the U.K., developers have so far limited marine solar plants to small, relatively safe bodies of water.

Heliofloat GmbH plans to change all that.

The product of research carried out at the Vienna University of Technology (TU Wien), the company was founded in 2014 by energy systems and thermodynamics professor Markus Haider, along with alumnus Roland Eisl.

The startup calls its new marine solution a “Heliofloat”—and plans to market the product to solar developers in regions that have exhausted more traditional land-based options.

Essentially a large platform, raised 10-15 metres above the water using an air chamber, the Heliofloat can be as long as 300 metres on one side. To keep the platform above the waves, the researchers have designed the air chamber to act in a similar way to a “downward facing barrel.” The company says its unique design allows the water to make direct contact with the air within the “barrel,” unlike sealed-bottom air chambers that contain air within a fixed chamber.

“The key to this, is that Heliofloat is supported by open floatation devices,” Haider said. “Were a platform to be simply mounted onto air-filled, closed containers, the design of the construction would have to be inefficiently heavy and robust in order to be able to withstand heavy waves.”

Haider said the open design works as a shock-absorber, allowing the air to absorb the tremendous energy of the waves. As a blower ensures the air chamber remains intact, the side walls of the “barrel” are strong enough to withstand the horizontal force of the waves.

Resting on several these downward-facing air tanks, above the rocky seas, is the main platform. The researchers say the technology itself is lightweight—weighing in at between five and 50 kilograms per square-meter, depending on its configuration—but it can support a load of up to 100 kg/square-metre. The company plans to market Heliofloat as solution for solar panels, but says it can also be used for a range of other applications, such as reservoir shading and aquaculture.

“Heliofloat platforms offer new possibilities for desalination plants and biomass extraction processes for salt water,” Eisl, who serves as the startup’s director, said. “In hot countries, Heliofloat platforms could be utilised to protect lakes against drying up.”

Currently looking for partners to demonstrate the technology on a large scale, the startup unveiled a miniature one-square metre example of its Heliofloat at the Hanover Messe industrial trade fair in Germany this week.