The 1,000-tonne turbine was installed off Nova Scotia last year, but a local fishermen's group says the regulatory green-light was based on bad data 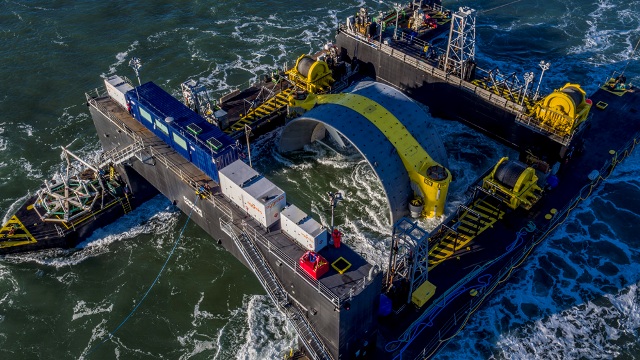 The 1,000-tonne tubine was installed off the Nova Scotia coast last year following months of delay. Another is slated to follow this year. PHOTO: Cape Sharp Tidal

HALIFAX—A group of fishermen is asking a Nova Scotia Supreme Court judge to overturn a decision by the province’s environment minister to approve the installation of a massive tidal turbine in the Bay of Fundy, saying the decision last June was based on poor scientific data.

The 1,000-tonne generator was installed in the Minas Passage in November, but the Bay of Fundy Inshore Fishermen’s Association says the test project should be put on hold to ensure the bay’s productive ecosystem is not harmed.

David Coles, the lawyer representing the 175-member association, told the court Environment Minister Margaret Miller overstepped her authority last June because the company behind he project—Cape Sharp Tidal—did not submit enough scientific data about the state of the bay prior to installation.

“The minister was required to consider certain things, and they’re just not in the record,” Coles told Judge Heather Robertson.

Coles said Miller’s decision was unreasonable because the company drafted an environmental effects monitoring program without first compiling “relevant baseline data” about the bay’s ecosystem, as spelled out in the province’s environmental regulations.

“There’s nothing in the court record to indicate the minister followed through on that responsibility,” he said. “The baseline … is the status of the Bay of Fundy prior to being disturbed by the turbines.”

The lawyer also cited letters submitted by the federal Fisheries Department that indicate the company’s environmental monitoring program “will provide only a limited understanding of the interaction with the marine environment.”

The department concluded that “more robust data is needed,” he said.

The judge challenged Coles on several occasions, suggesting the amount of baseline data compiled by the company might never be enough to satisfy the project’s critics.

Coles also noted that in the minister’s letter of approval, she called for a revised environmental monitoring program after installation and startup of the turbine. He said that didn’t make sense because any new measures wouldn’t provide an accurate picture of how the turbine had changed the environment.

The fishermen have long argued the project requires more study to ensure such turbines don’t harm marine life in the bay, and they’ve called for a pause in the project until a year-long study can establish a scientific baseline.

The association has repeatedly stressed that the bay is a rich breeding ground for lobster, groundfish and scallops.

Spokesman Colin Sproul has said the fishermen aren’t opposed to renewable energy, they just want to make sure the existing turbine and the ones that follow do not cause irreparable harm to the bay.

The turbine, on average, spins at between six and eight revolutions per minute, which is equivalent to a brisk walking speed if the turbine were to roll along the ground. The government has said monitoring at the other turbine sites has not recorded a single collision with ocean life.

Nova Scotia’s turbine can generate two megawatts of electricity—enough to supply only 500 homes. It stands about five storeys tall, with 10 blunt-nosed blades converging around a circular opening. It is anchored on the seabed at the mouth of a five-kilometre-wide channel near Parrsboro, where the crushing currents can travel at five metres per second.

In 2009, OpenHydro and Nova Scotia Power deployed a 400-tonne turbine in Minas Passage, only to see it shredded by the currents.

The partnership behind Cape Sharp Tidal includes Halifax-based Emera Inc. and OpenHydro, a French conglomerate that specializes in naval defence and energy.

Cape Sharp has said a second test turbine will be installed in the bay later this year. It is expected to be one of five aimed at testing different technologies.