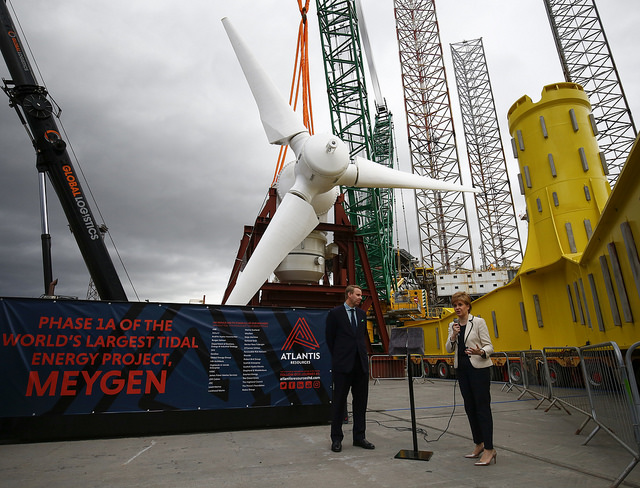 Phase 1A of the MyGen project includes four 1.5 megawatt turbines. The overall project is planned to eventually include 269 turbines. PHOTO: First Minister of Scotland, vie Flickr

EDINBURGH—With hundreds of towering offshore wind turbines already dotting its coast, Scotland is preparing to dive into another renewable energy technology—this time beneath the waves in the tumultuous waters of the Pentland Firth, which separates Northern Scotland from the Orkney Islands.

Earlier this week, flanked by an enormous 1.5 megawatt turbine, Scotland’s First Minister Nicola Sturgeon and Tim Cornelius, the CEO of renewable developer Atlantis Resources Ltd., unveiled the first phase of the MeyGen tidal energy project. Beginning with a four-turbine demonstration, known as Phase 1A, the project is eventually expected to include 269 tidal turbines and deliver 398 megawatts of power to the U.K. country’s electricity grid.

“This is the day the tidal power industry announced itself as the most exciting new asset class of renewable, sustainable generation in the UK’s future energy mix,” Cornelius said. “This is an industry that is creating jobs and is contributing to making Britain great again and Scotland is the undisputed world leader of this high growth sector.”

Supported by a 23 million pound (approximately $40 million) investment from the Scottish government, the first phase of the MyGen project marks the first time tidal stream technology will be deployed on a large scale—assuming Atlantis continues with development on the latter stages of the project. If completed, the renewable development will power the equivalent of approximately 175,000 homes.

Austrian manufacturer Andritz built three of the four turbines for the project, while Lockheed Martin built the remaining AR1500 turbine under contract with Atlantis. With the four 200-tonne turbines and their foundations now complete, Atlantis will transport the machinery to an offshore site in the Pentland Firth for installation this fall. It expects to connect the turbines to the grid using a 33 kilovolt power cable by the end of the year.

As Atlantis moves forward with the tidal project in the U.K., it’s also working to develop a demonstration project on Canada’s East Coast. The company secured a test berth at the Fundy Ocean Research Centre for Energy (FORCE) in Nova Scotia back in 2011 and signed a 4.5MW feed-in-tariff agreement with the province’s Department of Energy in 2014. The project remains under development, according to FORCE.

Meanwhile, Cape Sharp Tidal—another tidal developer, which was poised to sink a pair of turbines into the Bay of Fundy this spring—has faced delays and remains in a holding pattern. Cape Sharp, which is a joint venture between energy firm Emera Inc. and turbine maker OpenHydro, said last month it is currently working to retrofit the two turbines after it discovered a problem with one of their components. The company did not provide a timeline on when the renewable project would be ready to launch.