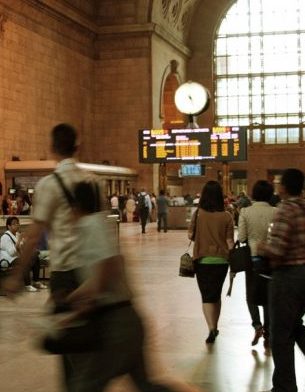 Federal officials have warned electrical grids and transportation hubs, such as Toronto’s Union Station, are vulnerable, even to an unsophisticated internal cyber attack. PHOTO: Danielle Scott, via Flickr

OTTAWA—Federal officials have quietly warned operators of electrical grids, transportation hubs and other key infrastructure of the cyber threat from insiders who could unleash devastating viruses and cripple systems, internal government notes reveal.

“The insider threat is difficult to detect and can cause real damage.”

No special hacking skills are required, just a portable memory key loaded with a malicious code. As a result, it is important that organizations have the right security protocols and procedures, “for example by limiting access to systems only to those who genuinely need it.”

A federal briefing on the insider threat was delivered last December to leaders of the 10 most crucial infrastructure sectors, the notes say.

They point out that over 90 per cent of critical infrastructure—key to delivering everything from food and clean water to banking and health services—is controlled by the private sector and all of it is dependent in one way or another on information technology to operate. Many critical infrastructure sectors are interdependent, meaning a problem in one could have a “cascading impact” in others.

The notes, prepared earlier this year for Monik Beauregard, a senior assistant deputy minister at Public Safety Canada, were obtained by The Canadian Press under the Access to Information Act.

Beauregard is chairing a panel today on the global implications of the challenges to cybersecurity at an intelligence conference in Ottawa.

The conference comes as the Liberal government undertakes a cybersecurity consultation that runs through mid-October. The overall aim is to identify gaps and opportunities, bring forward ideas to shape a renewed approach and capitalize on the advantages of new technology.

State-sponsored hackers, sophisticated criminals, cause-motivated hacktivists and people out to make mischief online all pose a threat, the government warns.

Public Safety is already working with critical infrastructure operators to prepare for the possibility of a major cyberattack on the Canadian electrical grid and telecommunications systems, the internal notes say.

Security officials call such an occurrence a “black swan”—a rare but devastating event that requires special attention due to the potential for massive losses should it happen.