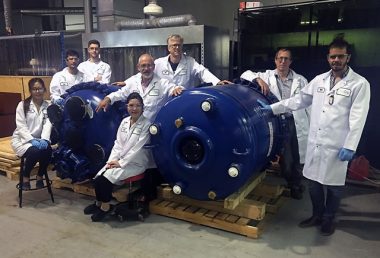 The Vancouver-based company will use pilot-scale reactor vessels to produce material for electric vehicle lithium-ion batteries. PHOTO: Nano One

The company is currently working to commercialize a process to produce low-cost energy storage material for electric vehicle batteries, and will use the funds to support work at its pilot plant.

Nano One said earlier this year it has begun assembly at its new plant and expects all critical components to arrive by the end of the year.

“It will enable us to make larger volumes of cathode material in 2017 and to showcase Nano One’s patented technology to market stakeholders who are eager to see it operating at the pilot scale,” Dan Blondal, the company’s CEO, said in an October statement.

Having secured a pair of U.S. patents for its lithium-ion cathode material production process, the pilot plant will simulate full-scale production.

Along with allowing the company to produce more battery material, the federal government said the facility will showcase the scalability and novelty of the company’s technology. Currently, cathode materials make up about one quarter of the cost of an EV battery.