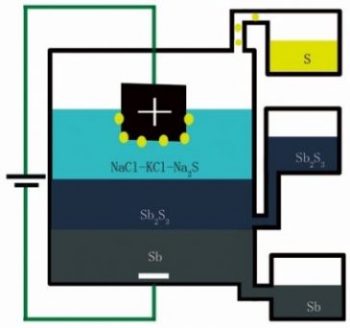 CAMBRIDGE, Mass.—A team of researchers meddling with electrochemical reactions at the Massachusetts Institute of Technology in search of a new battery design didn’t uncover the energy storage Holy Grail they were looking for.

Instead, they managed to stumble upon an entirely new way to produce the metalloid element antimony, and potentially, a better method for smelting copper, nickel and iron.

In a paper released this week in the academic journal Nature, MIT metals chemistry professor Donald Sadoway, post-doctoral student Huayi Yin and visiting scholar Brice Chung, explained they were looking to improve battery chemistry by attempting to add a second electrolyte (made of antimony sulfide) between the positive and negative electrodes in a high-temperature liquid battery.

When they tried to charge up the unit, something unexpected happened.

“We found that when we went to charge this putative battery, we were in fact producing liquid antimony instead of charging the battery,” Sadoway said in a statement.

To the researchers’ surprise, adding the antimony sulfide electrolyte to the experimental battery resulted in the antimony separating from the sulfur to form a pool of 99.9 per cent pure antimony as well as concentrated sulfur gas.

Unlike the typical process for smelting antimony, which releases sulfur dioxide gas into the air, the new electrolytic method allows the pollutant to be easily captured. In many ways, the new technique is similar to the century-old Hall-Héroult Process for smelting aluminum, but has never been effectively applied to antimony.

While the discovery would be relatively inconsequential for industry if it applied exclusively to antimony, Sadoway thinks the process could be utilized on more widely-used metals as well.

“The thing that made this such an exciting finding is that we could imagine doing the same for copper and nickel, metals that are used in large quantities,” he said.

Having achieved positive results with antimony—which has a melting point of 631 C—the researchers’ next step will be to duplicate their success using copper, which melts at 1,085 C.

If the researchers are able to apply the process to ores with even higher melting points, such as nickel, the new smelting technique could drastically reduce energy usage and greenhouse gas emissions. Reaching one step further, if the new method of electrolysis could be used to melt iron, it could kick-start a dramatic evolution in the energy-intensive steel industry.