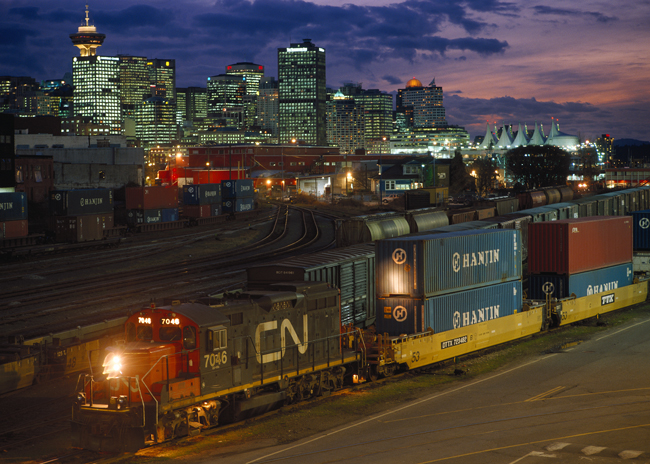 The rail company has set aside $500 million to bolster its technology over the next five years. PHOTO: CN

MONTREAL—Canadian National Railway says it will spend $500 million over the next five years on technology to improve its safety, efficiency and competitive edge, partly in response to the potential threat posed by driverless trucks.

CEO Luc Jobin told an investor conference June 14 that the country’s largest railway will make the investments to improve operations and stay ahead of changes to the trucking sector that are expected to evolve quickly over the next decade.

“These are exciting times where there are unparalleled opportunities to apply technology to advance rail operations and service beyond what was previously possible,” he said in Montreal.

CN’s plan would see a rise in automation, cutting labour costs spent conducting track inspections, and reduce manual and clerical work, Jobin said. He declined to say how many jobs could be lost.

The railway’s efforts are designed to increase revenues or reduce expenses to offset cost pressures it expects to face.

It plans to spend $28 million this year to acquire additional monitoring equipment for the early detection of train defects that would allow it to intervene before problems arise.

CN has already implemented some new technologies, which were on display at the investor conference on Tuesday, and is conducting trials on others. The company is using personal devices such as Readiband to monitor and record employee fatigue and alertness.

It is also testing a process called CanaPux to ship heavy crude from the Alberta oilsands to Asia. The process turns the bitumen into semi-solid pucks that can be more safely loaded and transported. The pucks float, don’t dissolve in water or burn, Walter Spracklin of RBC Capital Markets wrote in a report.

CN is also spending $1.2 billion by 2020 to implement Positive Train Control across its network as mandated by the U.S. government. The system uses wireless communications, GPS and onboard computers to alert conductors about track and speed changes while maintaining a safe separation between trains to avoid collisions.

“While we are mindful that some of the technologies are in the pilot phase, the exhibits and presentations we saw on day one of the investor day reaffirm our view that CN Rail is at the forefront of railroad innovation. Moreover, early results have been encouraging,” Spracklin added.