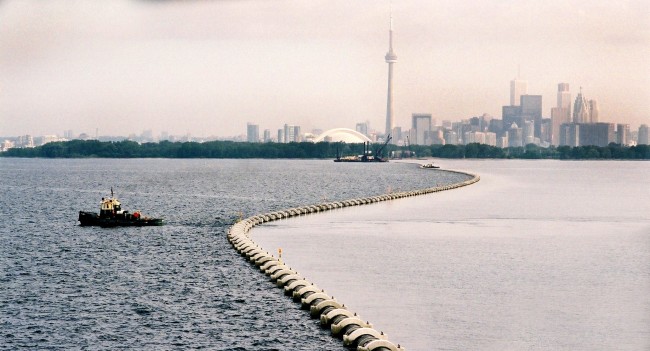 Enwave’s Deep Lake Water Cooling system has three five-kilometer pipes that extend deep into Lake Ontario, allowing 4 C water to be pumped through its system. Seen above, the pipes were laid in 2003. PHOTO:Enwave

TORONTO—Sunken in the frigid depths of Lake Ontario – out beyond the carnival lights of Centreville and the dull whir of island airport turboprops, five kilometres due south of the of the Toronto skyline – three high-density polyethylene pipes pump thousands of litres of near-freezing lake water toward Toronto every minute.

The water is routed into the city’s filtration system on Toronto Island, and from there to the John Street pumping station, where Enwave Energy Corp. takes over.

The company has been using water from the immense five-kilometer pipes – one part of its Deep Lake Water Cooling system – to air condition a significant portion of Toronto’s core for more than a decade. The system provides a reliable, green alternative to chiller systems, which are conventionally used to cool skyscrapers in the humid summer months. And given the company’s compelling, though largely under-the-radar success, Enwave is now looking to expand east of its traditional Yonge Street boundary.

“Right now our infrastructure is bound by Yonge Street to the east,” Sascha King, manager of communications and sponsorships at Enwave, said. “It’s a fairly big [undertaking] just because of the subway line. It makes it obviously a more expensive and complex project, but that is something we’re hoping to do within the next five years.”

Initially a City of Toronto-owned entity, Enwave was scooped up by Brookfield Asset Management Inc. in 2012, and now owns district heating and cooling systems across North America, including in Windsor, Ont., Chicago, Houston and Seattle. In addition to its Toronto cooling system, the company operates district heating in the city as well. The 16-boiler, 522 megawatt system provides heat to approximately 40 million cubic feet of floor space, representing 140 customers spanning the waterfront to Queen’s Park. 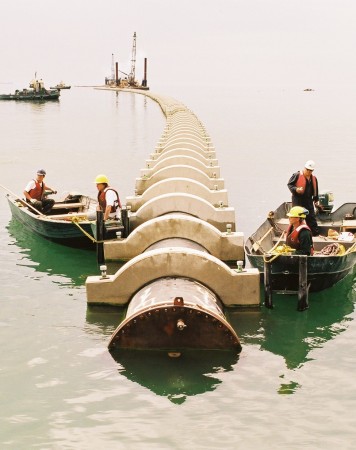 After operating the DLWC system for more than 10 years, Enwave is looking to expand. PHOTO: Enwave

But Enwave’s cooling network is even larger. Approximately 160 customers take advantage of the infrastructure, allowing their buildings to reduce electricity usage and water bills, while freeing up valuable office space ordinarily needed to contain industrial chillers, fans and cooling towers. The overwhelming majority of Enwave’s DLWC customers use the system to supply 100 per cent of their cooling.

As a result, a significant portion of Toronto’s core is chilled by lake water, including landmarks such as Toronto City Hall, the Air Canada Centre, Mount Sinai Hospital, TD Centre and Trump Tower. Even the cool, hops-filled air circulating Steam Whistle Brewery is courtesy of water pumped from 83 metres below the surface of Canada’s seventh-largest lake.

The DLWC system’s current nominal capacity is 72,000 gallons per minute, vastly larger than any conventional chiller, and larger than any other lake-source district cooling system in the world.

The system functions by using the 4 C lake water to cool the water in Enwave’s “closed loop.” This process is achieved by using a series of 18 stainless steel heat exchangers that transfer the heat from the icy water to the water segregated within Enwave’s closed system. After the energy exchange stage, the lake water enters Toronto’s potable water supply, while the cooled water in the “closed loop” is chilled further to 3 C using two large chillers. From there, the chilled water makes its way to Enwave’s customers, where it’s used to run building cooling systems.

“In our experience. It’s absolutely on-par with a chiller system,” King said. There is no way anybody would know the air they’re breathing was cooled by lake water and not a conventional chiller, she added.

And while the system allows downtown residents and workers to avoid the oppressive Toronto humidity, it also lets the environment share in the rewards. The system reduces electricity usage 90 per cent compared to conventional systems, and in the mid-2000s was eliminating 79,000 tonnes of carbon dioxide emissions annually, though that figure is likely inflated today due to the closure of Ontario’s coal plants. Enwave is currently investigating the exact environmental benefit of the DLWC system, but with so many different factors, it’s a difficult process. In addition to direct emissions reductions, water savings are also a notable perk as the DLWC systems takes advantage of water that would be pulled into the Toronto water supply regardless.

Meanwhile, the company is also focused on expansion. Enwave is looking at two different strategies to bring lake water cooling to more Torontonians. The first relies on tunneling under Yonge Street, which will allow it to expand its current infrastructure. Alternatively, Enwave is investigating the possibility of replicating its system on Toronto’s east end.

“Right now we are at the Island filtration plant and we’re currently looking at the feasibility of expanding coming from the Harris filtration plant that’s on the east end of the city,” King said. “It would be an entirely different sort of expansion. Instead of just expanding from our existing framework we’d be putting all-new pipes in and we’d be using the city’s existing infrastructure that’s already in the roads.”

Still, it will likely be a few years before Toronto is able to secure further underground cooling capacity. King noted both plans are only in the discussion stage at the moment, with the company targeting 2020 for an expansion.

“This isn’t anything that’s far down the pipeline, but we’re constantly working with the City of Toronto to try to brainstorm new ideas to expand the business,” she said.