by Maggie Michael, Elena Becatoros and Angela Charlton, The Associated Press, with files from The Canadian Press  May 19, 2016

An Airbus A320 plane operated by EgyptAir carrying 66 passengers, including one Canadian, disappeared over the Mediterranean Sea overnight 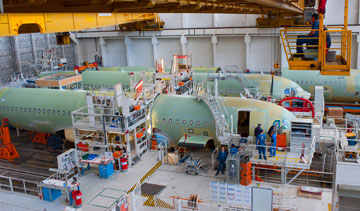 CAIRO—An EgyptAir flight from Paris to Cairo with 66 passengers and crew on board, including a Canadian, crashed in the Mediterranean Sea early May 19, Egyptian aviation officials said.

EgyptAir Flight 804 was lost from radar at 2:45 a.m. local time when it was flying at 37,000 feet, the airline said. It said the Airbus A320 had vanished 16 kilometres after it entered Egyptian airspace, around 280 km off the country’s coastline north of the Mediterranean port city of Alexandria.

In Cairo, Civil Aviation Minister Sherif Fathi told a news conference that he did not want to prematurely draw conclusions, but that indications suggest a terror attack as more likely cause of the crash.

But he cautioned that the truth would not be known before the investigation is concluded. Earlier, Egyptian Prime Minister Sherif Ismail also said a terror attack could not be ruled out. “We cannot rule anything out,” Ismail told reporters at Cairo airport.

EgyptAir said the Airbus A320 vanished 10 miles (16 kilometres) after it entered Egyptian airspace, around 280 kilometres (175 miles) off Egypt’s coastline north of the Mediterranean port city of Alexandria. The carrier’s account fits closely with an account from Konstantinos Lintzerakos, director of Greece’s Civil Aviation Authority.

An official said a signal had been picked up from the plane two hours after it disappeared from radar, thought to have been an emergency beacon

Egyptian military aircraft and navy ships were taking part in a search operation off Egypt’s Mediterranean coast to locate the plane.

The 56 passengers include one Canadian, 30 Egyptians, 15 French citizens, one Briton, two Iraqis, one Kuwaiti, one Saudi, one Sudanese, one Chadian, one Portuguese and one Algerian. The airline said a child and two babies were among the passengers.

Global Affairs Canada said it was “aware of the possibility that a Canadian may have been on board the flight” and that the department was “monitoring the situation closely.” The statement added that Canadian officials in Cairo and Paris are working with local authorities to confirm this information.

Egypt’s state-run newspaper Al-Ahram quoted an airport official as saying the pilot did not send a distress call, and that last contact with the plane was made 10 minutes before it disappeared from radar. It did not identify the official.

Airbus is aware of the disappearance, but “we have no official information at this stage of the certitude of an accident,” the company’s spokesman Jacques Rocca said.

The Airbus A320, the model of the EgyptAir plane that crashed in the Mediterranean, is one of the most common planes in service around the world today.

Similar to the Boeing 737, it’s a single-aisle, twin-engine jet used to connect cities that are between one and five hours apart.

The Airbus A320 is generally considered one of the safest passenger planes in service. A Boeing safety analysis in early 2015 said the A320 registered just 0.14 fatal accidents per million takeoffs.

The Paris airport authority and the French civil aviation authority would not immediately comment.

Queries about the missing plane sent out to the U.S. Federal Aviation Agency were not returned.

French president Francois Hollande spoke with Egyptian president Abdel-Fattah el-Sissi on the phone and agreed to “closely co-operate to establish as soon as possible the circumstances” in which the EgyptAir flight disappeared, according to a statement issued in Paris.

French Prime Minister Manuel Valls said no scenario could be ruled out at the moment as for what caused the plane to disappear. France, he told RTL radio, was “ready” to join the search operation if Egyptian authorities requested his country’s assistance.

Neither France’s foreign ministry nor its interior ministry would comment on the disappearance or on whether it could have been an attack.

France remains under a state of emergency after Islamic extremist attacks killed 130 people in a spree of attacks in November claimed by the extremist Islamic State group.

Greece joined the search and rescue operation for the EgyptAir flight with two aircraft: one C-130 and one early warning aircraft, officials at the Hellenic National Defence General Staff said. They said one frigate was also heading to the area, and helicopters are on standby on the southern island of Karpathos for potential rescue or recovery operations.