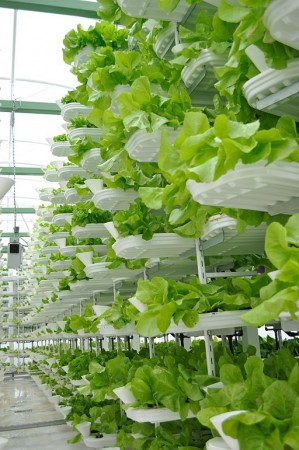 KYOTO, Japan—Japanese vertical farmer, Spread Co., has begun construction on what it called the world’s first large-scale vegetable factory. The facility will be fully automated from the seeding process to harvesting and be capable of producing 30,000 heads of lettuce per day.

The company currently operates a facility in the city of Kameoka that uses artifical lighting and vertical farming techniques to produce four different types of lettuce that are shipped to as many as 2,000 different stores in Tokyo and the country’s Kansai region. As a result of its success with the smaller plant, Spread is expanding to a 4,800 square-metre facility, which is still smaller than the average soccer pitch.

“There are water and food shortages due to extreme weather events accompanied by the increasing global population. Amid these problems, Spread has effectively managed energy through the vegetable factory business and has been working to lay the foundation for a more secure and sustainable society,” the company said.

The new Kyoto facility is expected to cost approximately 2 billion yen, or about $22 million, and open in 2017.

Water recycling and reduced labour costs are the facility’s two most significant selling points. Spread says it is able to recycle 98 per cent of the water used for cultivation, while cutting labour costs by 50 per cent through automation. The facility also uses state-of-the-art LED lighting to minimize electricity costs. The company says the technology can be utilized worldwide. Regions such as Japan with little land available for agriculture are likely to be the early adopters of the technology, however.

And despite being incorporated less than 10 years ago, Spread has ambitious expansion plans. The company hopes the new factory kick-starts further expansion. The company is looking to produce 500,000 heads of lettuce per day by 2020.

Japanese companies are not the only vertical farmers, however. Vancouver-based VertiCrop is currently pursuing funding to build a facility and expand the technology’s use in North America.