Aiming to open up more of the high seas to wind development, companies looking to floating turbines that use ballast instead of towers to stay afloat 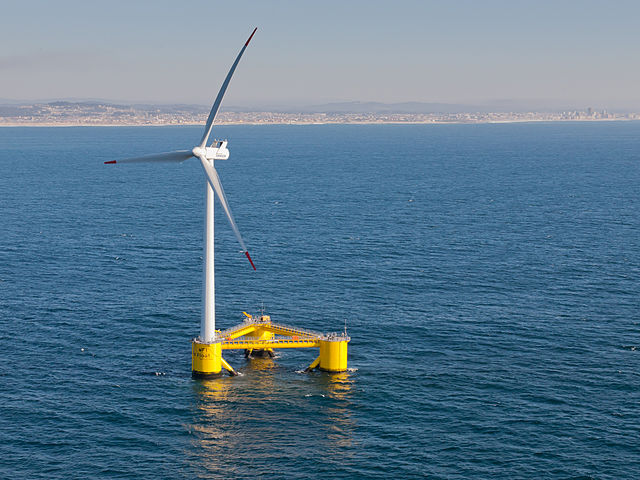 A WindFloat turbine off the coast of Portugal, one of several demonstration-project-scale floating turbines currently at sea. PHOTO: Untrakdrover, via Wikimedia Commons

HONOLULU—Massive wind turbines could end up floating in deep ocean waters off Hawaii’s shores under proposals to bring more renewable energy to the islands.

Their plans would use technology that floats the tall turbines in deep waters miles offshore. The proposals are in the early stages and would face years of environmental reviews and community meetings before possible approval, just as a recently-approved Statoil project off Scotland did. The Norwegian energy company’s proposal was green-lit last week, and construction on the world’s first mid-scale floating wind farm is expected to begin later this year.

As far as the Hawaiian projects go, the federal Bureau of Ocean Energy Management, which will decide whether to approve ocean leases for the projects, held a meeting about the proposals May 16.

A.W. Hawaii Wind, a Texas company that’s a subsidiary of Denmark-based Alpha Wind Energy, is proposing two offshore floating wind farms, each generating about 400 megawatts of energy with 50 turbines. One is proposed for the northwest side of Oahu 12 miles off the coast of Kaena Point, in waters about a half-mile deep. The company also is proposing a wind farm in waters 17 miles south of Diamond Head. 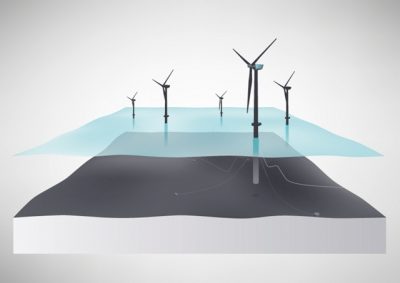 A second company, Progression Hawaii Offshore Wind, is proposing a $1.8 billion, 400 megawatt wind farm using 40 to 50 floating turbines off Oahu’s South Shore, in waters that are also about a half-mile deep.

Both companies are proposing to use a technology called WindFloat, where a turbine that stands about 600 feet is attached to a triangular platform that floats near the surface of the ocean. The floats would be anchored to the ocean floor, and undersea cables would transfer the energy to power plants on land. Offshore wind farms are not new, but most use turbines fixed to the ocean floor, and floating turbines are rare.

There are many challenges to taking on a project of this scope in Hawaii, including cultural and environmental issues, deep water, a relatively small electric grid, and unexploded ordnance in the ocean waters surrounding the island, said Jens Borsting Petersen, owner of A.W. Hawaii Wind.

“This is by far the most difficult thing in wind that’s ever been attempted on this globe,” said Petersen. “When you talk about wind energy, trying to do something on Hawaii offshore is exceptionally complicated.”

Progression Energy has held more than 140 meetings with environmental, tourism, Native Hawaiian and other stakeholder groups, using their feedback to choose a site, Swartley said. Looking out from the beach, most of the turbines would be over the horizon, he said.

“You’ll be able to see them if you really look for them, but it will be really tough,” Swartley said.

Among concerns raised so far is the potential danger that whales or submarines could bump into the cords anchoring the turbines to the ocean floor, said Henry Curtis, executive director of Life of the Land, a Hawaii non-profit organization.

“Do you want to really turn the ocean into the next industrial site?” Curtis asked.

Some fishermen are concerned about the possible impact on birds flying over the sea.

“The best fish spotters we have are birds,” said Ron Tam, secretary of the Hawaii Fishermen’s Alliance for Conservation and Tradition. “And then, are we going to be able to fish in and about and through these floating machines? We don’t know…That has a definite economic impact.”

Hawaii has set a goal for its utilities to use 100 per cent renewable energy by the year 2045. The state’s utilities are currently generating about 24 per cent of their energy from renewable sources through wind, solar, geothermal and biomass energy, said Mark Glick, energy administrator for the Hawaii State Energy Office. Offshore wind farms could help the state meet the larger goal, Glick said.

“We have to figure this out together, because the low-hanging fruit has been collected, and essentially the tougher decisions are before us…the next steps are going to be crucial,” Glick said.