The Honda Ridgeline pickup and Chrysler Pacifica minivan were named 2017 North American Truck and Utility Vehicle of the Year, respectively 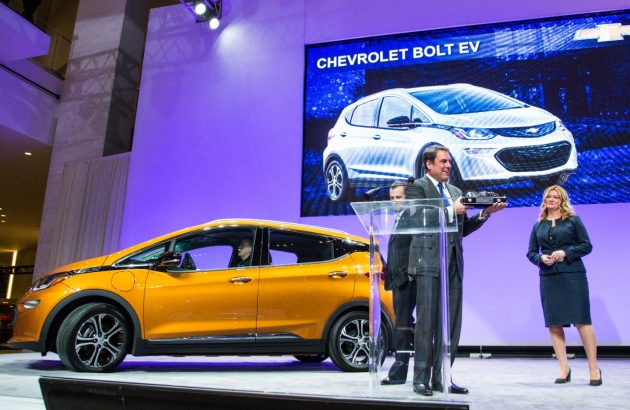 The 2017 Chevrolet Bolt is the first electric vehicle to win North American Car of the Year. PHOTO: General Motors

DETROIT—The 2017 Chevrolet Bolt electric car was named the North American Car of the Year, the first time an electric vehicle has won the award.

The Honda Ridgeline pickup and Chrysler Pacifica minivan were named 2017 North American Truck and Utility Vehicle of the Year, respectively.

The announcement was made at the North American International Auto Show in Detroit.

The award for utility vehicle of the year is new for 2017. the category includes sport utility vehicles and minivans. It was prompted by huge consumer interest in SUVs, many of which compete with minivans as kid-friendly family transportation.

The Bolt boasts an EPA-certified range of 238 miles on a charge.

The Ridgeline was engineered to offer a pickup bed for cargo on a car-style chassis that delivers a smoother ride than most pickups. It offers unusual features like a “trunk” under its cargo bed’s floor and a double-hinged tailgate that opens down or from the side.

The Pacifica minivan replaces two models in Fiat Chrysler’s lineup, the Chrysler Town & Country and Dodge Grand Caravan. It includes a plug-in hybrid model that can go 35 miles on a charge, enough to cover daily driving for many minivans.

The North American Car and Truck and Utility Vehicle of the Year awards honor excellence in innovation, design, safety, performance, technology, driver satisfaction and value. Initiated in 1994, they are judged about 60 professional automotive journalists from the United States and Canada who work for magazines, television, radio, newspapers and web sites.

Jurors evaluated dozens of new vehicles that went on sale this year to determine the finalists.