The small lunar outpost would serve as a staging point for trips to the moon's surface, and eventually Mars and beyond 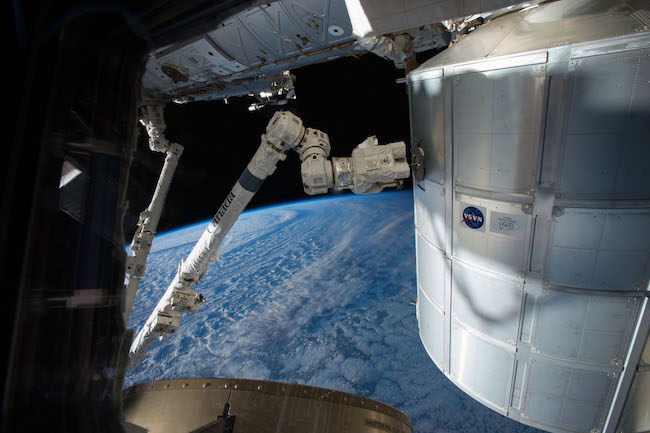 The proposed new station would be the next step beyond the International Space Station and be used as a staging point for trips to the moon’s surface. PHOTO: NASA

MONTREAL—The Canadian Space Agency is working to develop robotic arms as its contribution to a small lunar outpost to be built by international partners in the next decade.

Earlier this week, the American and Russian space agencies signed a statement long-term space projects, which focus on the so-called deep space gateway.

The small space station would be placed in orbit between the Earth and the moon.

“For Canada, the challenge right now is to identify what our contribution could be to humanity’s next step in human exploration,” said Gilles Leclerc, the Canadian agency’s head of space exploration.

“We are defining what Canada will do in the next 30 years in space.”

Canada and the world’s space agencies are committed to the International Space Station until 2024.

The next destination would be the lunar station—a platform to serve as a staging point to travel to the moon’s surface and eventually, further away.

“The ultimate destination for all partners … is Mars,” Leclerc said.

A natural fit for Canada’s contribution would revolve around robotics.

Leclerc said there are three possibilities: robotic arms, moon rovers and space mining—technologies Canada already develops and could be useful.

Concept studies have started on two robotic arms that will help build and maintain the mini-station.

MacDonald, Dettwiler and Associates Ltd. of B.C. has been awarded a $2.75 million contract to work on the new Canadarms.

“The CSA are asking that we explore the notion of a small multi-purpose arm—one that could work inside the space station and possibly on the surface of the moon as well,” he said.

Fulford said the new robotic arms could be operating on the lunar outpost in the 2020s, which would help get a Canadian astronaut to the moon.

Leclerc said the future of the station will depend on the means of transportation to get back to the moon. NASA is developing the Space Launch System (SLS), a giant rocket developed with deep space travel in mind.

The SLS would be topped with an Orion capsule with a crew of four.

A tentative plan would see an SLS rocket travel around the moon unmanned in 2019 and another after that to come within three years _ this time with astronauts.

“There’s going to be at least three missions to construct the deep space gateway from 2020 to 2026,” Leclerc said, after which the station would be manned.

Fellow astronaut David Saint-Jacques is scheduled for a six-month visit to the ISS in November 2018 and colleague Jeremy Hansen could see his own mission between 2020 and 2024.

Leclerc said Canada is also looking at commercially-built capsules by companies like SpaceX to transport its corps.

It comes as the federal government works on a new space strategy, following consultations earlier this year by Canada’s Space Advisory Board.

It released a report suggesting Canada’s space industry has “lost ground” with rapidly changing environment and substantial space investments by other countries.

The board made several recommendations, including one that space be designated as a national strategic asset.