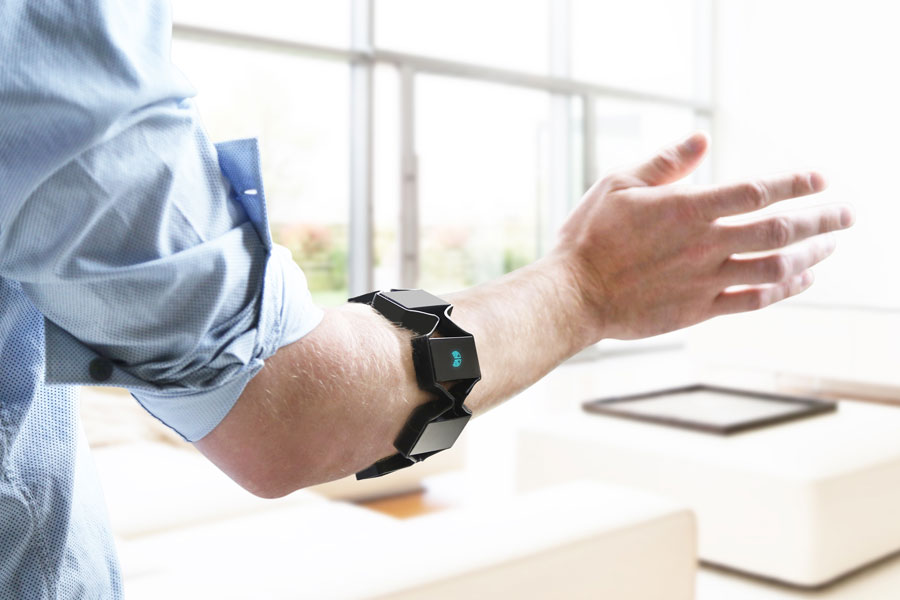 KITCHENER, Ont.—When Tom Cruise introduced the concept of gesture-control technology to audiences more than a decade ago in the film ‘Minority Report,’ the idea of operating computers by waving your hand through the air seemed like Hollywood fantasy.

But Kitchener, Ont.-based Thalmic Labs Inc. has bridged the gap between science-fiction and reality with the Myo, an armband that lets users control their laptop, phone and television with simple hand and wrist movements.

Next month, the Myo makes its debut on the retail market under a distribution pact with Amazon, Inc.

Its creators claim their device has the potential to shake up how we use our computers.

“It was never really intended as a replacement for the computer mouse,” said Stephen Lake, co-founder of the Thalmic Labs, in a recent interview.

“It’s more for how you interact with things out in the world.”

Lake, 25, sees big opportunities for the Myo in the medical industry and beyond, but he’s starting with baby steps in the consumer market where the armband is being pitched as a new way to interact with PowerPoint presentations, video games and remote controlled vehicles.

The Myo uses eight sensors to measure the electrical signals generated by muscle movement in your arm, while another tracks arm motion.

The device recognizes five distinct gestures programmed to specific functions: A wave right can move you forward through a photo gallery, and a rotating clenched fist can control the volume on your music player.

The technology grabbed attention from early adopters, who helped the company pre-sell 50,000 Myo devices through its website.

In March, Thalmic Labs will bring the technology to an even bigger audience through Amazon, which will sell the device for US$199 a unit, a price comparable with other wearable technologies like fitness tracking devices and smartwatches.

Wearable technology has the potential to change how people think about the virtual world, Lake said.

“I’m not talking about a dystopian cyborg future. If you do it right, the technology will be there when you need it—and out of the way when you don’t,” he said.

While the Myo’s functions are somewhat basic at this point, the company is collaborating with third-party app developers to find new ways the armband can make jobs easier.

In the medical community, the Myo is being tested with surgeons as a tool that helps them interact with medical images during surgery without contaminating their hands.

Workers in oilfields have tested the device as a way to handle paperwork in even the messiest situations.

The concept was born after Lake and fellow University of Waterloo graduates Matthew Bailey and Aaron Grant spent months working together on a wearable technology project for the school’s mechatronics engineering program.

They came up with a waistbelt that could be worn by blind people to help navigate physical obstacles.

While the technology never took off, it got the group talking, and one night at a bar they began to brainstorm new ideas.

“It got us interested in this whole idea of wearables,” he said. “We could give everyone else new abilities or superpowers using this idea of merging humans and technology.”

Thalmic Labs was founded in 2012 through $1 million of startup money from a group of small investors and, the following year, the company secured another $14.5 million from Boston-based venture capital firm Spark Capital LLC and an investment wing of chipmaker Intel Corp.

Since then, the company has grown to more than 50 employees and doubled its office space in Kitchener.

Parts of the Myo are manufactured overseas, but the device itself is assembled in Canada, and Lake said he has no intentions of moving the company’s office or manufacturing outside the country.

“We had potential investors early on who thought we should be in Silicon Valley, but we said we’re going to stay in the Kitchener-Waterloo area,” he said.