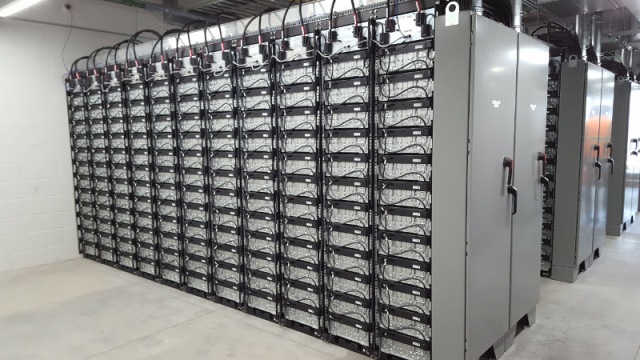 The facility stores 20 megawatts of electricity in 12,240 lithium-ion batteries in 1,020 racks. PHOTO: AltaGas

CALGARY—AltaGas Ltd. has powered up a massive battery storage site on the U.S. West Coast.

“Providing energy from electricity stored in lithium-ion batteries provides clean reliable energy that complements California’s renewable energy portfolio while adding to the versatility of our asset base which is well situated for pursuing other energy storage developments,” David Harris, AltaGas president and CEO, said in a statement.

Built at the company’s existing Pomona gas plant, the battery storage system has a 20 megawatt capacity and holds a four-hour charge. It’s currently the largest operational lithium-ion storage site in North America—though that distinction will be short-lived. Another California project is set to eclipse it within the next few weeks.

Contracted by Southern California Edison, which signed a 10-year Energy Storage Resource Adequacy Purchase Agreement with the Canadian firm, the plant cost about $45 million, according to initial estimates.

AltaGas contracted out the majority of the project to a range of energy storage and construction companies. Samsung SDI, Parker Hannifin, Power Engineers and Greensmith Energy Management Systems were all involved in the project.

The plant was finished on-time and on-budget.