The Canada C3 vessel will travel from Toronto to Victoria via the Northwest Passage in 150 days, and Bullfrog biodiesel will help power the first leg of the journey 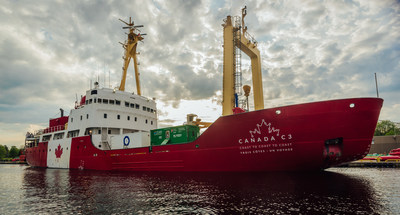 The Canada C3 expedition vessel is a 67 metre long research icebreaker, which will be fueled, in part, by biodiesel. PHOTO: Bullfrog Power

TORONTO—Green energy provider Bullfrog Power will be providing biofuel for a shipborne journey across the country.

Canada C3 is a 150-day expedition from Toronto to Victoria via the Northwest Passage to foster cultural and scientific research, marked by the 150th anniversary of Confederation. The ship will be making pit stops at coastal communities throughout Canada, where events will be held.

The Canada C3 expedition vessel is a 67 metre long research icebreaker, and the first leg of its coast-to-coast trip, from Toronto to Montreal, will be fueled in part by Bullfrog’s biodiesel—a fuel derived from food waste and cooking oils.

For the remaining legs of Canada C3, carbon offsets for the ship’s fuel will be provided by Less Emissions Inc., a sister company to Bullfrog.

Bullfrog will also be injecting wind-generated and hydro electricity into the grid to match the conventional electricity used during Canada C3’s various onshore events.