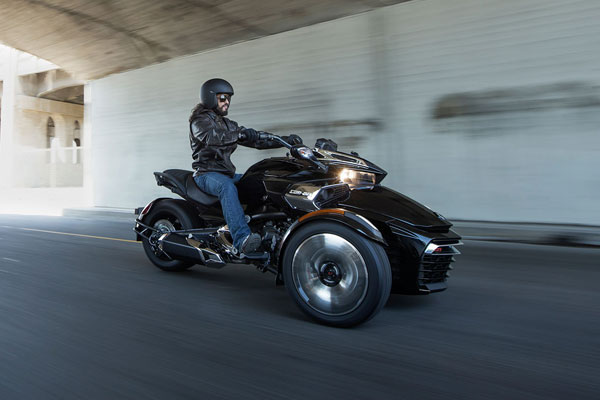 VALCOURT, Que.—Quebec-based BRP Inc. has unveiled the latest iteration of its popular three-wheeled roadster, the 2015 Can-Am Spyder F3, calling it “a major evolution in riding.”

The F3 slots into the middle of the Spyder lineup, which was introduced by the former Bombardier Inc. unit in 2007.

“The Spyder F3 represents the next era for the Can-Am Spyder lineup and for on-road riding as a whole,” Chris Dawson, vice-president and general manager of global sales and consumer experience, said in a release.

“The Spyder F3 truly delivers a soul-stirring riding experience, combining a muscular design, a custom-fit cruising-riding position, and an advanced stability system for one incredible ride. You have to ride it to believe it.”

That custom riding position comes thanks to BRP’s UFit system, which allows customers to personalize the F3 with custom peg positions and handlebar options.

The roadster features a Rotax 1330 ACE engine mated to a six-speed transmission, as well as brakes developed by Brembo S.p.A. specially for the Spyder.

Pricing for the Spyder F3 starts at $21,799, in the ballpark of the ST model and in the middle of its entry level RS and top-end RT models.

All Spyder models are built at the company’s Valcourt, Que., facility.