The Can-Am brand is a sponsor of two NASCAR events, the Can-Am Duel At Daytona and the Can-Am 500 in Phoenix in November 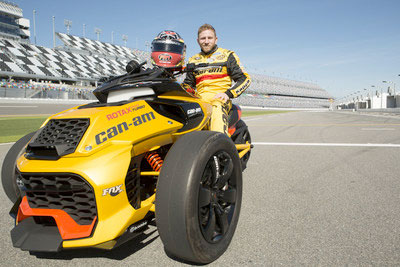 The designers of BRP’s Spyder F3 Turbo took inspiration from the Speedway’s racing heritage, and was introduced leading into the 2016 Can-Am Duel At Daytona.

To pump up the fun factor, its “sport” mode allows for controlled rear tire drifts. Unfortunately this concept is not planned for production but was developed to highlight its performance and innovative technology to NASCAR fans.

“BRP’s Rotax engineers challenged themselves to develop a turbo version of the Can-Am Spyder F3 engine, which resulted in this high-performance vehicle. Our team then fine-tuned everything to unleash its potential,” said Rénald Plante, director, Can-Am Spyder engineering. “This concept showcases the advantages of a Y-frame design, such as a lower center of gravity, the ability to drift and superb tire grip during aggressive cornering.”

The Can-Am brand is the entitlement sponsor of the Can-Am Duel At Daytona, as well as the Can-Am 500 in Phoenix in November.

BRP will display its full line of innovation-driven Can-Am products, including the turbocharged Can-Am Spyder concept, as well as Can-Am ATVs, side-by-side vehicles and Can-Am Spyder roadsters at track Midway areas throughout the season, including Daytona International Speedway.