The Apple and IBM partnership will target enterprise customers and challenge BlackBerry, which is trying to solidify its position in government agencies and businesses 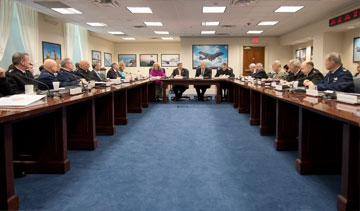 TORONTO—Shares of BlackBerry took a beating July 16 after details emerged on partnership between two of the world’s biggest technology companies—Apple and IBM—that will cater to business customers.

On the Toronto Stock Exchange, BlackBerry shares closed down 12 per cent, or a $1.42 at $10.72 on extremely high volume of around eight million shares.

International Business Machines Corp. (IBM) and Apple Inc. said late July 15 they plan to launch a partnership this fall that will have IBM creating more business-themed applications that will be pre-loaded on iPhones and iPads.

The strategy would make available more than 100 IBM apps that cater to specific industries, like retail and health care.

The announcement will put Apple and IBM in competition with BlackBerry, which is trying to reaffirm its position catering to government agencies and businesses that require secure mobile communications.

Apple CEO Tim Cook said his company is turning to help from IBM because it doesn’t understand the needs of corporate customers as well as it does consumers.

IBM CEO Ginni Rometty said the alliance will help her company by widening the audience for its technological tools, providing bigger returns on the roughly $24 billion that IBM has invested in data analytics.

In an emailed statement, BlackBerry took an optimistic tone on the competition saying it “only underscores the ongoing need for secure end-to-end enterprise mobility solutions like those BlackBerry has delivered for years.”

BlackBerry has dedicated more resources to building its relationship with business customers under the leadership of chief executive John Chen, who joined the company last November.

Chen was hired last year to reshape BlackBerry, cut costs and lead an effort to find a better footing in the competitive tech sector. Before he took the job, he helped turn software company Sybase into a profitable operation focused on mobile business technology.

His strategy has set aside the consumer market as a priority, after the BlackBerry 10 line of phones failed to become a sales hit.

As more of BlackBerry’s competitors turn their attention to the highly lucrative, and generally loyal, enterprise market, the Canadian company could begin to feel extra pressure.

William Blair analyst Anil Doradla said he believes the Apple and IBM partnership will be a “long-term negative” for BlackBerry.

“In the likely scenario of Apple/IBM doing well in servicing the needs of enterprise customers, we see little reason for enterprises to choose BlackBerry’s platform over Apple’s,” he wrote in a note.