Capable of storing five-times as much energy as lithium-ion batteries, zinc-air batteries have been hampered by charging issues and costly precious metals. Australian engineers say a new breakthrough could change all that 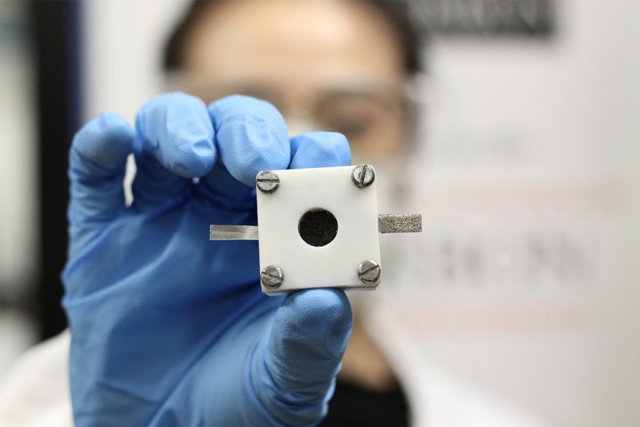 A zinc-air rechargeable battery. The technology is often used in hearing aids, but other applications remain limited due to high costs. PHOTO: University of Sydney

SYDNEY, Australia—A team of chemical engineers at the University of Sydney say they have sidestepped a major stumbling block to broadening the appeal of zinc-air batteries—one of a number of technologies that could challenge lithium-ion batteries for dominance in booming storage market.

Relying on abundant zinc and oxygen from the air, zinc-air batteries can theoretically store about five-time as much energy as than lithium-ion counterparts and are already used in devices such as hearing aids and railway signals. While they have been commercially available for decades, the Australian researchers say the technology has been held back from broader electronics applications because of recharging challenges.

The breakthrough, revealed by the research team last week, revolves around a new method for creating electrocatalysts for zinc-air batteries.

“Up until now, rechargeable zinc-air batteries have been made with expensive precious metal catalysts, such as platinum and iridium oxide,” said Yuan Chen, a professor at the university’s Faculty of Engineering and Information Technologies and the paper’s lead author. “In contrast, our method produces a family of new high-performance and low-cost catalysts.”

The team said their new three-stage process overcomes issues with other electrocatalysts, which have been unable to reduce and generate oxygen during the charging and discharging of the battery.

They published their findings in the journal Advanced Materials Aug. 14.

In the paper’s abstract, the researcher describe the catalysts as “a family of hybrid materials comprising amorphous bimetallic oxide nanoparticles anchored on N-doped reduced graphene oxide with simultaneous control of nanoparticle elemental composition, size, and crystallinity.”

The process uses relatively cheap elements such as iron, cobalt and nickel.

So far, the University of Sydney team has put zinc batteries that use its novel electrocatalysts through a number of rechargeability tests. The batteries have recorded an efficacy drop of 10 per cent over 60 cycles of 120 hours.