The robotic Calmer device, which replaces a mattress inside an incubator, has a platform that rises up and down to mimic breathing, and a heartbeat sound is audible through a microphone outside the device 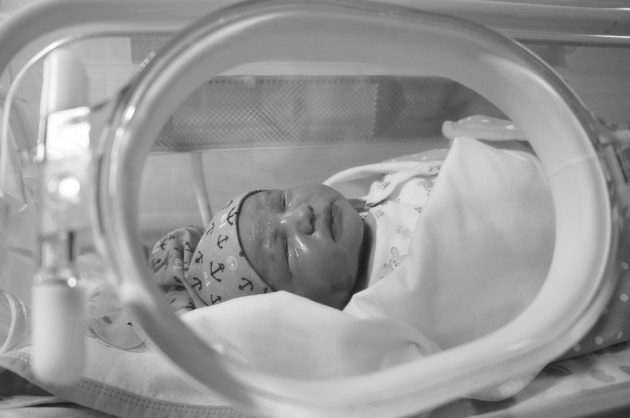 VANCOUVER—Researchers in British Columbia have designed a “robot” that helps reduce pain for premature babies by simulating skin-to-skin contact with a parent who may not be available during around-the-clock procedures in a neonatal intensive care unit.

Lead inventor and occupational therapist Liisa Holsti said the Calmer device is a rectangular platform that replaces a mattress inside an incubator and is programmed with information on a parent’s heartbeat and breathing motion.

The robotic part of Calmer is that the platform rises up and down to mimic breathing, and a heartbeat sound is audible through a microphone outside the device, said Holsti, adding a pad on top resembles a skin-like surface.

The aim is to help babies cope with pain through touch instead of medication as much as possible while they’re exposed to multiple procedures, such as the drawing of blood, which can be done multiple times a day over several months.

A randomized clinical trial involving 49 infants born prematurely between 27 and 36 weeks of pregnancy at BC Women’s Hospital and Health Centre concluded Calmer provides similar benefits to human touch in reducing pain when the babies had their blood drawn.

The findings of the study, completed between October 2014 and February 2018, were published this week in the journal Pain Reports.

A parent’s or caregiver’s touch is the most healing and the Calmer isn’t intended to replace that, said Holsti, the Canada research chair in neonatal health and development. She worked with four other researchers on the project that involved a prototype built by engineering students at the British Columbia Institute of Technology.

“We purposely did not design it to look anything like a human being,” she said, adding her work since 1985 in neonatal intensive care units, where she taught parents how to support their babies at home after leaving the hospital, sparked an interest in assessing infant pain and trying to relieve it.

“We have about 30,000 babies born prematurely in Canada alone every year so my hope would be that we would be helping all of those babies with Calmer.”

Holsti said nurses often provide so-called hand hugging by placing their hands around an infant’s head, arms and legs in a curled position during blood collection, but the study suggests the device would save almost half a million dollars in staffing costs every year at just the neonatal intensive care unit where the study was done.

Lauren Mathany, whose twin daughters Hazel and Isla were born 24 weeks into her pregnancy last April and weighed less than two pounds each, said that while the Calmer research had been completed by then, it would have been a reassuring tool for her and her spouse when they went home to sleep or take a shower after doing plenty of hang hugging and skin-to-skin touching.

“The NICU is the most difficult place to be. It challenges you in every single way,” she said.

Methany’s children spent over four months at the hospital and were medically fragile when they were bought home but are now thriving at almost a year old.

Dr. Ran Goldman, who has been a pain researcher at the BC Children’s Hospital Research Institute for 20 years but wasn’t involved with the Calmer study, said the device shows promise because there’s a greater understanding that healing is delayed when pain is part of an infant’s treatment.

Scientists in the late 1960s believed babies didn’t feel pain but there’s now an increasing understanding that they’re more sensitive to it than older children or adults because their pain-inhibiting mechanisms haven’t fully developed, said Goldman, who is also an emergency room physician at BC Children’s Hospital.

“Research has shown that babies who suffered pain as neonates do keep this memory later on and respond differently when they get pain experiences later in life,” he said.