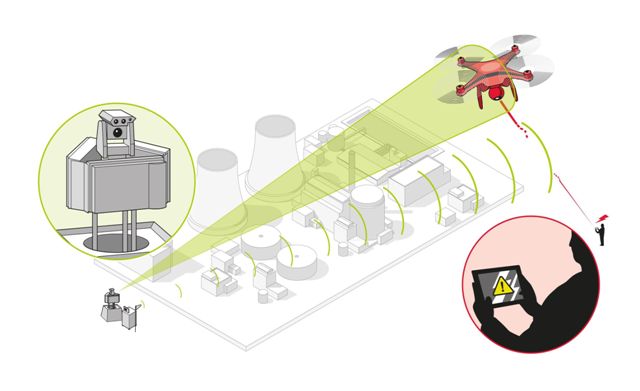 LAS VEGAS—As hordes of hobbyists take to the skies with unmanned aerial vehicles, or drones, the small pilot-less flyers have some defence experts worried—and others working on countermeasures.

The Defense and Space division of aerospace firm, Airbus Group, has developed a counter-UAV system designed to detect and marginalize invasive drones.

“All over the world, incidents with universally available small drones have revealed a security gap with regards to critical installations such as factories, airports or nuclear plants,” Thomas Müller, head of Electronics and Border Security at Airbus Defence and Space, said. “As a specialist in defense electronics, we have all the technologies in our portfolio and the integration knowledge which are needed to set up a quick-response protection system with extremely low false alarm rates.”

With last year’s alcohol-fuelled drone crash on White House grounds in Washington still fresh in the minds of security personnel worldwide, the technology could defend airspace around critical buildings or sites.

The anti-drone hardware uses infrared cameras and direction finders to spot drones as far away as 10 kilometres and assess whether or not they are a threat. If the drone is considered dangerous, the system uses a jammer to interrupt the link between the drone and its pilot or navigation system. The company added that the technology also tracks the position of the pilot, allowing law enforcement to follow up on the ground.

The jammer may even be able to take control of the flyer.

“Since the jamming technology contains versatile receiving and transmitting capabilities, more sophisticated measures like remote control classification and GPS spoofing can be utilized as well. This allows effective and specific jamming and, therefore, a takeover of the UAV,” the company said.

In addition to being effective, Airbus touted the system’s ability to limit collateral damage. The firm said it already has one buyer in the energy sector “seeking protection of its assets.”

An operational system will be available in mid-2016.