In addition to new engines, which generate more horsepower and torque while using less gas, the 2017 Boxster has a new name, 718, a throwback to the motor company's racing glory of the 50s and 60s 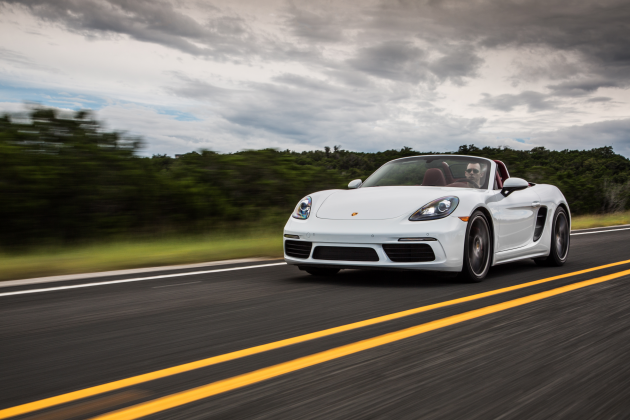 The car offers a distinctive emotional experience: sexy and beckoning on the outside and exciting and delighting to drive. Low to the pavement and with the engine mounted mid-ship in the car, the rear-drive 718 Boxster turns and manoeuvres precisely while remaining flat and unfettered with scarcely any body roll. PHOTO: Porsche

The name—718 Boxster—is new, too, and evokes the flat, four-cylinder engines that powered Porsche 718 race cars to victories in the late 1950s and early ’60s.

For 2017, Porsche dropped the Boxster’s fuel-gulping six cylinders and replaced them with two new turbocharged fours that generate more horsepower—up to 350—and more torque—up to 309 foot-pounds—while using less gas.

The test, two-seat 718 Boxster with manual transmission averaged 26 miles per gallon on city and highway roads. That model is rated by the U.S. government at 21 mpg in the city and 28 mpg on highways, on par with a 2017 Chevrolet Camaro or Ford Mustang with turbo four cylinders.

The car offers a distinctive emotional experience: sexy and beckoning on the outside and exciting and delighting to drive. Low to the pavement and with the engine mounted mid-ship in the car, the rear-drive 718 Boxster turns and manoeuvres precisely while remaining flat and unfettered with scarcely any body roll.

The Boxster’s engine is just 12 inches from the driver’s back and every shift, every run into the high revs becomes a symphony. Although the Boxster is a soft-top convertible, the test car had no body shudder or shake that sometimes comes with cars that don’t have a fixed, metal roof.

Starting manufacturer’s price, including destination charge, for the 718 Boxster is US$58,450 with the base, 300-horsepower, 2-litre, turbocharged and direct injected four cylinder and six-speed manual transmission. That’s an increase of about $5,000 over last year’s base Boxster.

But the engine power of the base 2017 car is more akin to that of the 2016 Boxster S that was priced around $63,000. Plus the base 2017 Boxster comes standard with bi-Xenon headlamps, assisted parking and an upgraded sound system, among other things—all of which were options last year.

It has been 20 years since the Boxster debuted as a lower-priced, convertible Porsche, and the new, 718 Boxster is as sexy and sleek for today as its predecessors were.

Everything is carefully considered, and little is extraneous. For example, the two doors are sculpted to direct air into the large air intakes behind them to feed and maximize air getting into the turbo engines to generate power. They are not decorative, fake intakes.

Driver and passenger drop down low onto the Boxster seats and can feel a bit like they’re sitting low in a tub. Sport seats with sizable side bolsters in the test car kept riders in place but made getting out of the Porsche less than graceful.

The turbo engine in the test car, with a hint of turbo lag at times when the driver demanded acceleration, didn’t deliver quite the same sensation as the old six-cylinder engines. But there’s a palpable feeling of force and excitement as driver and passenger backs push into their seats and the Boxster speeds forward.

The Boxster’s 0-to-60-mph times are all under five seconds—sports car territory—with top speeds of at least 170 mph. That doesn’t change if the car is fitted with the manual transmission that was in the test car or the optional PDK transmission that offers automatic operation or extremely quick manual shifts without needing a clutch pedal.

Porsche balances the Boxster’s power and overall lightweight body with a highly managed suspension, which can be upgraded with the optional Active Suspension Management system. It was on the test car and adjusted damping force continuously at each wheel based on road conditions such as off-camber pavement, and driving style.

Powerful brakes with four-point calipers came with good pedal feel and had a precise biting point where the brakes grabbed quickly.

While the soft top is lined, outside noises from nearby semitrailers still intruded into the passenger compartment. The power-operated roof opens and closes in nine seconds.