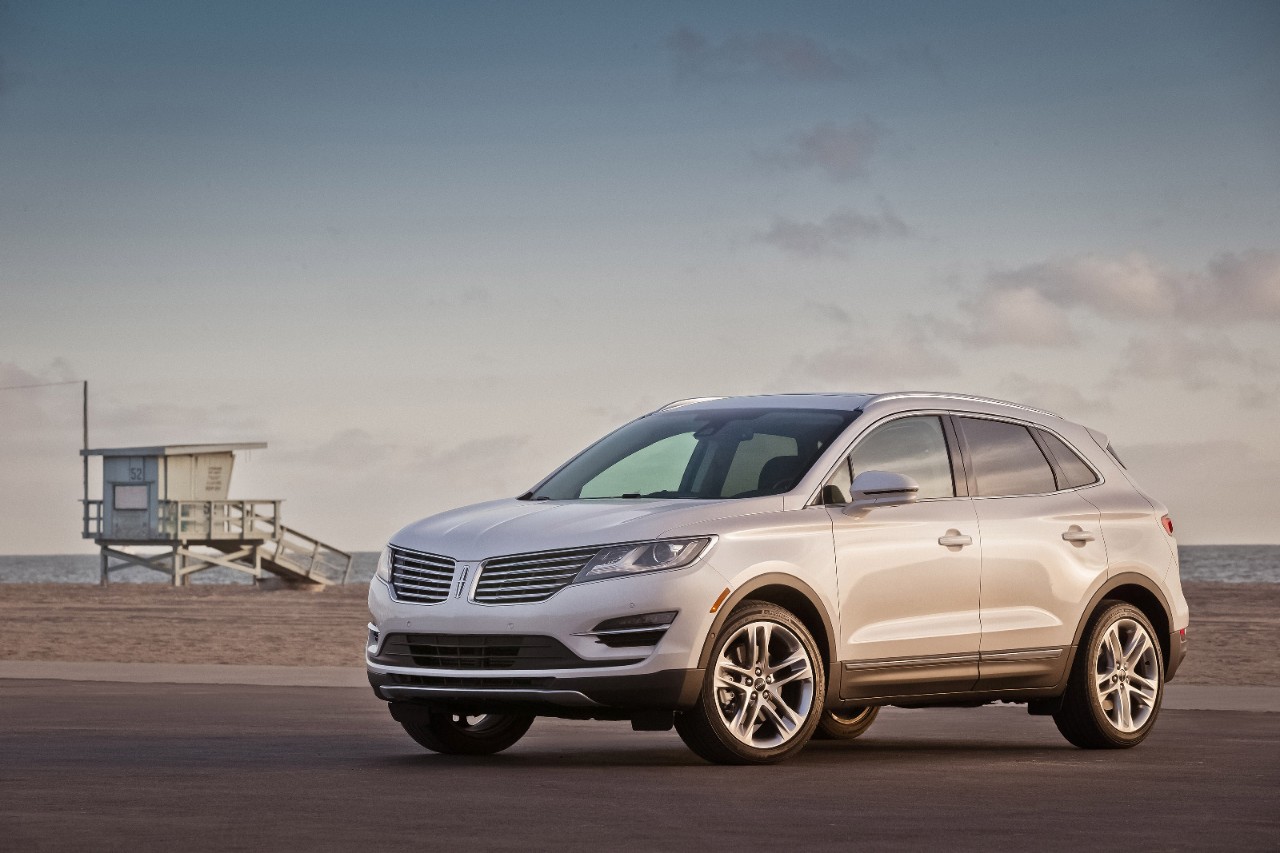 The MKC has an optional 2.3-litre turbo four cylinder engine which produces a V-6-like 285 horsepower and 305 foot-pounds of torque

DETROIT—In its first model year, the compact 2015 Lincoln MKC is the smallest sport utility vehicle ever to express Lincoln’s brand of luxury.

There’s soft Scottish leather seat trim and welcoming “puddle lights” that not only courteously illuminate the ground by the front doors but project the Lincoln logo there when a driver with key fob approaches.

Even shifting the MKC is different, as Park, Reverse and other gears are activated by a vertical line of push buttons on the dashboard, rather than a gear shift lever.

Two key reasons for the pricing: The MKC is based on the Ford Escape SUV and built at the same Louisville, Ky., factory as the Escape

The MKC is offered only with turbocharged, four-cylinder engines.

And while the MKC shape resembles that of a VW Touareg SUV, the front retains Lincoln’s split-wing grille. But thankfully, it’s toned down and not gaudy as it was years ago on the Navigator.

The test MKC, which was a top-of-the-line model with all-wheel drive and the more powerful four cylinder, included a list of technology options and topped out at more than $49,000.

Tech lovers will find virtually all of today’s latest features are available for a price on the MKC, including forward collision alert, lane-keeping and voice recognition control. With active park assist, this Lincoln not only helps ease its way into parallel parking spots, its “park-out” feature helps ease the way out of tight spots, too.

Much of the technology can be quickly tailored to a driver’s tastes. For example, the lane-keeping feature can be set to just alert a driver when the vehicle begins to wander out of its lane, alert and aid the driver to get the vehicle back in the lane or just aid the driver.

Daytime running lights can be configured to more than one appearance, and a computer app will allow the driver to pre-program a time for the car to remotely start to warm the interior before the driver arrives.

The MKC tester felt stress-free, particularly when the SUV was in “comfort” mode, where suspension damping allowed for a compliant ride, even with optional 19-inch wheels.

Steering was responsive but not touchy, with good on-centre feel.

The uplevel engine provided strong power with nary a sensation of turbo lag, thanks to a three-port exhaust manifold head that separates the exhaust from certain cylinders as it heads to the twin-scroll turbocharger. This engine also is set for the Ford Mustang, but the MKC got it first. Ford Motor Co. owns both Ford and Lincoln brands.

In the test MKC that weighed nearly 4,000 pounds, power came on strongly but not wildly, and passengers who hadn’t noticed the “EcoBoost” badge on the liftgate assumed this SUV had six-cylinder power.

But fuel economy was nowhere near the federal government ratings of 18 miles per gallon in city driving and 26 mpg on the highway.

With some aggressive driving and a majority of city driving, the tester averaged just 17.8 mpg. With a 15.5-gallon gasoline tank, this translated into only a 275-mile range.

It also took some getting used to the brightly illuminated, orange letters of the “SelectShift” gear buttons. On the centre console, they’re not where a driver expects them to be. Additionally, the start push button sits at the bottom of the SelectShift buttons and is not well differentiated.