The Challenger SRT Hellcat is the first Dodge with a supercharged Hemi V-8. Watch a video of this incredible piece of automotive engineering 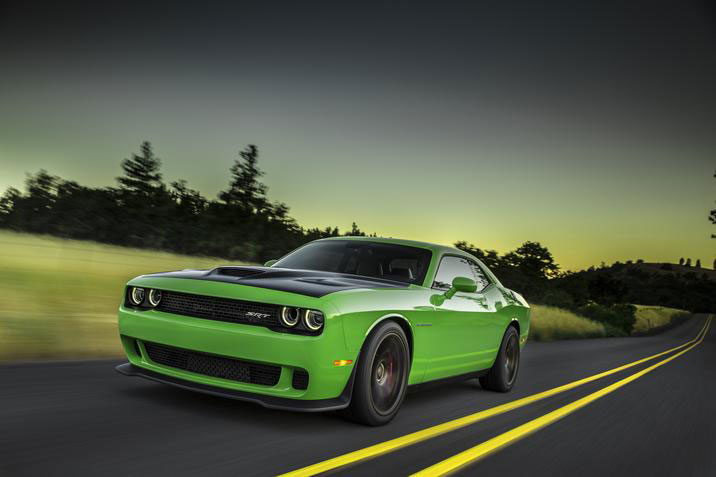 With a 0-to-60-mph time of just 3.7 seconds and a quarter-mile time of only 11.2 seconds, the Challenger SRT Hellcat is among the fastest production cars in the world and easily outshines America’s other muscle cars. PHOTO: Chrysler Group LLC

DETROIT—Want some attention and excitement in the new year? Try the new-for 2015 Dodge Challenger SRT Hellcat—the one with a 707-horsepower, supercharged Hemi V-8 under the hood.

Popular Mechanics magazine has already crowned the “wildest muscle car Detroit (has) ever built” as the “Best Muscle Car” for 2015.

With a 0-to-60-mph time of just 3.7 seconds and a quarter-mile time of only 11.2 seconds, the Challenger SRT Hellcat is among the fastest production cars in the world and easily outshines America’s other muscle cars.

Both competitors have V-8s, but they are not supercharged.

Pricing for the Challenger SRT Hellcat is not unreasonable, given the car’s unique power.

Note that a base, 2015 Challenger SXT with 305-horsepower V-6 has a starting retail price, including destination charge, of $27,990, which is less than half the starting price of a 2015 Challenger with Hellcat engine.

To be sure, the 2015 Challenger in any trim level has retro looks. The long, wide body of the two-door coupe is reminiscent of the early 1970s when the Challenger, Camaro and Mustang were popular muscle cars.

But the rear-wheel drive Challenger SRT Hellcat goes beyond nostalgia. For the first time, it’s a Challenger with a black and a red key fob.

The red one unlocks the full engine power all the way up to 707 horses, while the black one might be called the “safer-for-valet” fob. It limits engine power to 500 horses and keeps electronic stability control on all the time. On automatic transmission models, like the test car, the red fob also gets the car moving from second gear and avoids extreme burnouts.

The car’s sounds, deeply throaty and loud, were impressive, promising a wild ride. On the other hand, the Challenger SRT Hellcat could be a docile traveller if it was driven like a normal car. Using the lengthy throttle travel, the driver can easily manage pedal pressure and the power appropriately for city streets, school zones and leisurely drives.

The Challenger tester didn’t feel like it was lugging at all, just moving as requested. It was only the driver who felt as if the car was crawling at these residential-street speeds.

Activating the Sport or Track drive mode and pressing the accelerator pedal deeply, however, brought a different character to the car.

The quickness of response could be breathtaking as torque peaks at an amazing 650 foot-pound at 4,000 rpm.

But fuel mileage is the pits, with a government rating of just 13 miles per gallon in the city and 21 or 22 mpg, depending on the transmission, on highways.

Big and heavy at more than 4,300 pounds, the Challenger impressed with its strong body control. The overall ride in the test car was firm and road vibrations came through strongly to passengers. But the ride was not jolting on most roads and didn’t feel punishing.

Brembo brakes front and rear, with six-piston calipers at the front, ensure strong stopping power and worked impressively on the test car.

Check out this video of the Awesome 2015 Dodge Challenger Hellcat:

Getting into the Challenger’s back seat is difficult for all but youths. Legroom back there is 33.1 inches.

Trunk space is 16.2 cubic feet, much of it in length, not depth.

A 2015 Challenger with V-6 earned an overall five out of five stars in U.S. government crash tests.

Consumer Reports lists the Challenger as a “recommended buy,” with average predicted reliability for the R/T with non-supercharged V-8.

Some 11,000 Challengers from the 2015 model were the subject of a safety recall as instrument gauges might not work at startup because of an undersized microprocessor circuit trace.