With emissions in the crosshairs, Alberta wind energy industry ready to boom 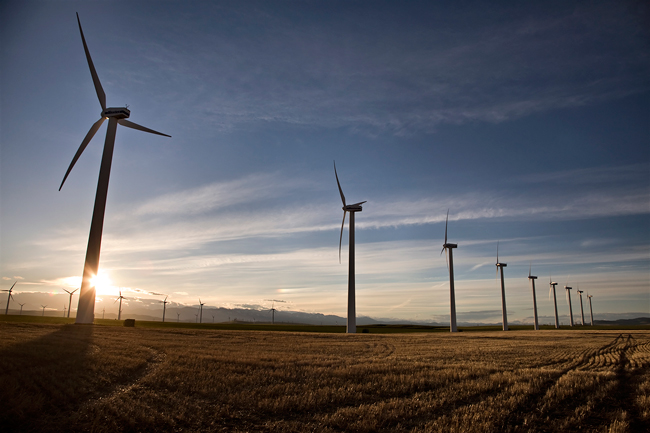 PINCHER CREEK, Alta.—There are three things one can be assured of in the Pincher Creek area of southwestern Alberta—death, taxes and the wind will blow.

Windswept is the word often used to describe the region with its rolling hills, cattle ranches, farms and the Rocky Mountains to the west.

And it is the wind that’s eliciting some optimism at a time when Canada is seeking to reduce its carbon footprint and turn to alternative energy sources.

With their giant 80-metre-high turbines stretching as far as the eye can see and 45-metre-long blades turning gracefully in the breeze, wind farms are potentially a big beneficiary of changes promised by both the Alberta and federal governments.

“The wind is always blowing in southern Alberta it seems. For the locals who have grown up around the wind from childhood, it’s just another day for them,” said Wayne Oliver, TransAlta’s operations supervisor for the region, which includes Fort Macleod.

TransAlta, Canada’s largest publicly traded power generator and marketer of electricity and renewable energy, has 460 wind turbines in the area. Some of the older models are being decommissioned and the pricetag for new ones isn’t cheap, running between $2 million and $5 million, depending on the output, which can be as much as three million watts of electricity per hour.

But Oliver said 100 megawatts of energy will supply the needs of about 120,000 homes.

He also said most people don’t understand where their electricity comes from.

“The general public just wants to know that when they hit the switch the lights will come on and they can cook supper when they get home from work.”

“We have a long-term, viable resource in the quantity of wind that blows through southern Alberta,” Oliver said.

“Until we get to the point that we’d have large-scale battery storage of wind energy, wind is always going to be supplemental to a base power load structure,” he added.

“In Alberta we have coal and natural gas, we have some hydro. These are our baseload generators and wind can nicely supplement that for the time being.”

TransAlta said last month that plans to invest in hydroelectric, wind, solar and natural gas co-generation facilities in Alberta were “on hold” until the details of the province’s climate change plans are known.

Alberta’s resource-based economy makes up a third of Canada’s total greenhouse gas emissions and the province’s energy minister said a climate implementation team is currently looking at how big a role wind, solar and hydro can play in the future.

Marg McCuaig-Boyd said right now only about 11 per cent of Alberta’s electricity is provided from renewable energy.

“It’s going to play a role just like solar and hydro and thermal—we’re going to look at a mix,” McCuaig-Boyd told The Canadian Press.

“At the end of the day we’re still going to have the bulk of our generation from natural gas but there will be around a 30 per cent mix. Wind will certainly play a key role.”