Wind, solar microgrid storage gets a boost with three-port converter 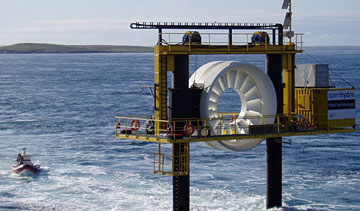 OpenHydro has been selected to build a four-megawatt tidal installation in the Bay of Fundy. PHOTO OpenHydro

Research firm Navigant Research forecasts that revenue from deployments of microgrids will be just under $10 billion in 2013, increasing to just more than $40 billion annually by 2020.

Frost & Sullivan also thinks mircrogrids are poised for growth, saying the global microgrid market is rapidly gaining prominence as supportive government policies in various countries encourage renewable energy development, such as wind and solar. The firm estimates that there will be a sharp rise in installations from 2015 to 2029, and the large value chain of participants actively contributing to microgrid development will further fuel a market boom beyond 2015.

The company estimates that its Hybrid Converter will reduce the size and weight of microgrid power electronics that integrate PV and storage by 90 per cent, which reduces material, manufacturing, shipping and installation costs.

Ideal Power engineers and markets its Power Packet Switching Architecture (PPSA) that improves the size, cost, efficiency, flexibility and reliability of electronic power converters. The firm has won multiple grants including one from the Department of Energy’s Advanced Research Projects Agency – Energy (ARPA-E) to commercialize bi-directional power switches, which are expected to improve power density by thirty percent and reduce efficiency losses by fifty percent. For more information, visit www.IdealPower.com.