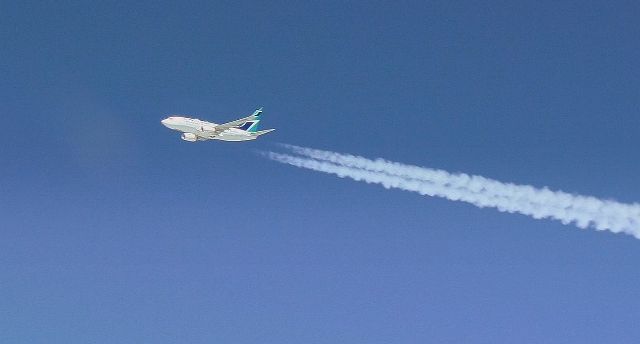 WestJet has improved the fuel efficiency of its aircraft by almost 50 per cent over the past 15 years. Looking at biofuels as the next step, it intends to continue scaling back its emissions. PHOTO: Shawn, via Wikimedia Commons

CALGARY—Canada’s second-largest airline is looking to home-grown cleantech to cut down on the heavy environmental toll associated with conventional jet fuels.

Calgary-based WestJet Airlines Ltd. has announced it will partner with Alberta’s Clean Energy Technology Centre (CETC) on the development of feedstock biofuels, vowing to get “actively involved” in working on cleaner aviation fuels that are both sustainable and affordable.

“There is a great opportunity to develop a sustainable biofuel industry within Western Canada and Alberta, as there is an abundant supply of biomass, infrastructure and the human resources at the ready,” Geoffrey Tauvette, director of Environment and Fuel at WestJet, said. “We feel that the location of the CETC is ideal for testing the waters.”

Though WestJet has yet to determine the amount of money it will dedicate to the project, Tauvette said pinpointing how much the biofuel research will cost—and how much the airline is prepared to commit—is one of the next items on the agenda.

Located in Drayton Valley in central Alberta, the Clean Energy Technology Centre aims to become a hub for alternative fuel research. Ultimately, the centre hopes to take advantage of its proximity to bio-resources, such as feedstocks and forestry byproducts, to establish an integrated biofuel industry with a local supply chain.

“Aviation biofuels look and act exactly like conventional jet fuel but are made from sustainable feedstock instead of crude oil,” Tauvette said. “We are looking at second generation feedstocks that are scalable, certified sustainable and do not interfere with food security.”

If biofuels do become a viable alternative to conventional fossil fuel, the project could provide the region with sustainable jobs—providing a much-needed economic catalyst at a time when rural Alberta is reeling from the drastic plunge in oil and gas prices over the past two years.

Meanwhile, the environment would also reap significant benefits. According to the Air Transport Action Group, a non-profit industry association, the aviation sector produced approximately 705 million tonnes of carbon dioxide in 2013, or about 2 per cent of global emissions. By integrating biofuels, research has shown the industry could reduce its emissions by much as 80 per cent.

While engine makers research other alternatives like electric propulsion, most airlines, including WestJet, see biofuel as the most realistic short-term solution.

“For the near future, biofuels represents aviation’s best and biggest opportunity to further reduce our emissions,” Tauvette said.

After improving its fuel efficiency 50 per cent over the past 15 years, WestJet hopes the project will help it reach its goal of a 50 per cent greenhouse gas emissions cut by 2050.