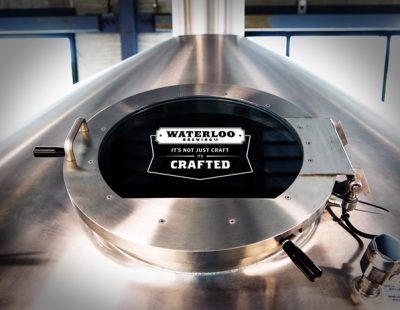 KITCHENER, Ont.—Brick Brewing Co. Ltd.’s suds are looking a little greener than they did a year ago.

The Ontario brewer, which makes Laker discount beer, the Waterloo craft lineup and Red Baron, among others, opened a new Kitchener, Ont. brewhouse at the end of last summer, and has spent the subsequent months producing more beer with fewer emissions.

“Nature is at the heart of our business,” Russell Tabata, the company’s COO, said. “Yeast, water, grains, hops are all of the Earth and the brewing and fermenting of beer is a very natural process. So when we decided the time was right to upgrade our brewhouse, we chose to invest in the equipment that honoured this relationship with the planet.”

The brewer outfitted the new $9.3 million facility with modern emissions-saving equipment, including machinery that takes advantage of heat recovery and reuse, materials utilization and waste recovery. Designed to save the company money on its energy bill and cut its carbon footprint, the company says the investment is already paying off.

After assessing its performance over the past few month. Brick Brewing says it has reduced its thermal energy usage by 52 per cent, its electrical usage by 32 per cent and its water consumption by 48 per cent. The new Kitchener plant also produces four-fifths less wastewater. Making the efficiency savings even more impressive, the company has achieved those results while increasing its output 300 per cent.

“This is one of the most resource efficient brewhouse in the world, and the first of its kind in North America,” George Croft, the company’s president and CEO, said.

While Brick Brewing lays claim to “greenest in North America,” it’s not the only Canadian brewery placing serious focus on cutting emissions. Vancouver’s Granville Island Brewing, for example, signed a deal with Bullfrog Power earlier this year to power all its operations with renewables. Meanwhile, along with using Bullfrog Power for its electricity, Toronto’s Steam Whistle Brewing employs a number of other emissions-saving technologies, including using Enwave’s cooling system for climate control.