According to the automaker, its new Drive-E powertrains deliver efficiency with power thanks to a combination of world-first technologies that mean “the number of cylinders is no longer important to describe power and drivability.”

“We have created smaller, more intelligent engines with power curves that give exciting driveability compared with engines with more cylinders yet deliver the fuel economy of only four cylinders,” Volvo Car Group vice-president of powertrain engineering Derek Crabb said in a release about the new engine lineup.

To deliver power, the new gas-powered engines combine a compressor unit that acts like a supercharger to deliver bottom-end torque, and a turbocharger at higher revs.

The engines are also outfitted with friction-reduction measures like ball bearings on the camshaft, high-speed continuous variable valve timing and intelligent heat management with a fully variable electric water pump.

The gas-powered offerings will start at 140-horsepower and go all the way up to more than 300-hp, Volvo said.

For added efficiency, the automaker mated the line of Drive-E engines to either a new eight-speed automatic transmission or enhanced six-speed manual gearbox which it says is “tuned for improved fuel economy.”

Diesel-powered versions of the Drive-E engines will also be available, with power ranging from 120- to 230-horsepower.

According to the automaker, the Drive-E engines will come from the factory prepared for future electrification capabilities.

Key components, like an integrated starter generator, can be connected easily—and the compact size of the four-cylinder engines means that the electric motor can be fitted in the front or rear of the vehicle. 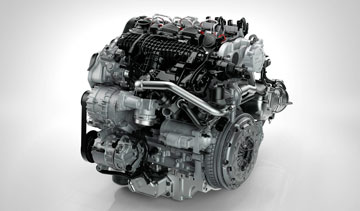 The battery pack will be located in the centre of the car.

“In addition, by adding electrification such as plug-in hybrid technology, we will reach power figures in the V8 territory.”