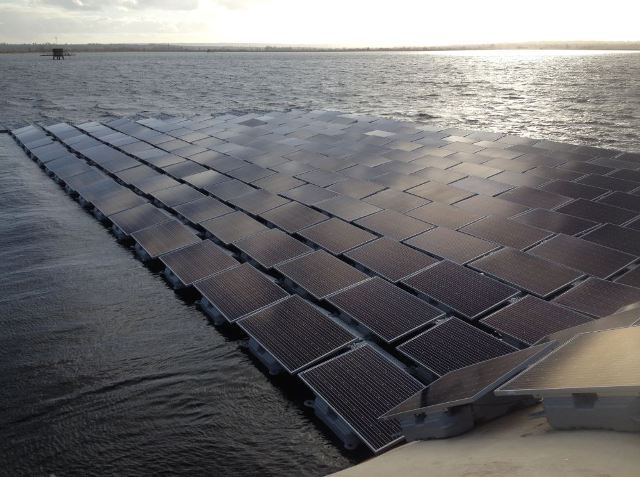 LONDON—England may be known for its dreary weather and oft-overcast skies, but that hasn’t deterred a group of businesses from wading forward with a solar energy project that will see Europe’s largest floating solar array installed on Queen Elizabeth II Reservoir in Greater London near Walton-on-Thames.

Lightsource Renewable Energy and Thames Water expect to complete work on the 23,000-panel project later this month. With a nameplate capacity of 6.3 megawatts, the project remains relatively small when compared to larger land-based solar farms, but is large enough to snatch the title of largest marine solar plant in Europe.

Power from the renewable project will help power Thames Water’s nearby water treatment works, contributing to the utility’s goal of self-generating one-third of its energy by 2020.

Responsible for constructing and operating the plant, solar energy firm, Lightsource, expects to connect the array to the grid by the end of the month. Designers will keep the plant’s panels above water using a platform consisting of 61,000 floats and 177 anchors. The solar installation will cover about one-tenth of the reservoir—the equivalent of about eight football pitches.

As in many urban centres, land is at a premium in London, and the floating plant takes advantage of an area that would normally be off-limits to developers.

Japan is another country actively pursuing marine solar to boost renewable generation without impacting residents. Electronics conglomerate Kyocera Corp. recently broke ground on the world’s largest solar plant outside Tokyo. With a 13.7 MW capacity, the project can pump out more than twice the power of the Thames project.