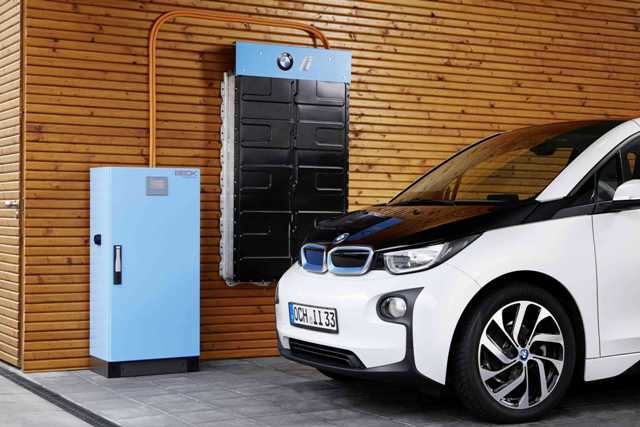 The energy storage unit will give used batteries from BMW’s all-electric i3 a second life as a stationary off-peak storage and backup power system. PHOTO: BMW

MONTREAL—You can add BMW Group to the growing number of automakers looking to drain more life out of their battery technology.

BMW i, the hybrid and electric vehicle wing of the German automaker, has introduced a new energy storage unit that uses spent batteries from its i3 electric hatchback to provide homes with off-peak energy or backup power.

Introducing the unit at the Electric Vehicle Symposium & Exhibition this week in Montreal, BMW said it will incorporate repurposed batteries from the 22 kilowatt/hour or 33 kWh models of the i3. Though the second-life batteries will have deteriorated through years of use on the road, the company said the unit will generally be able to power a household for up to 24 hours; household energy use in the U.S. ranges between 15 kWh and 30 kWh, according to the automaker.

Joining Nissan and Mercedes, which are both launching forays into the home battery market to compete with Tesla’s Powerwall, BMW said its unit can run on both new and second-life batteries. Touting the sustainability benefits of using of a spent auto battery, BMW said the system ensures batteries are used efficiently at all stages of life. Though Nissan’s recently-introduced xStorage device also uses repurposed batteries as well, Tesla’s Powerwall runs on a newly-manufactured power pack.

Working with BECK Automation, BMW said the unit will be optimized to operate as efficiently as possible, using an automated system to track real-time energy readings and make the necessary corrections. Similar to Tesla’s Powerwall, the wall-mounted unit is designed for basements or garages. Though the automaker said the new battery is market-ready, it has not yet released pricing details.