by Canadian Manufacturing.com Staff, with a file from The Canadian Press  January 12, 2016 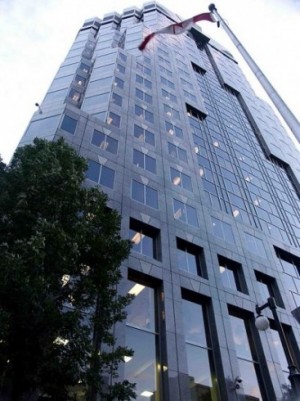 SNC-Lavalin as well as its parnter, Aecon, will each generate about $138 million in annual revenue as a result of the contract. SNC headquarters on René-Lévesque Boulevard in Montreal. PHOTO: Gene Arboit, via Wikimedia Commons

MONTREAL—A 50/50 joint venture between engineering and construction firms SNC-Lavalin and Aecon Group has been awarded a major piece of the $12.8 billion Darlington Nuclear Station refurbishment project.

Under the terms of the $2.75 billion contract, the two firms will refurbish the reactor cores as well as replace critical components in the generating station east of Toronto that supplies 20 per cent of Ontario’s power.

“Following almost four years of preparation and planning, this amendment to proceed with the physical refurbishment work demonstrates OPG’s confidence in our joint venture team and in our capabilities in the nuclear industry,” Sandy Taylor, president of Power at SNC, said.

Meanwhile, Sara O’Brien, an analyst at RBC Capital Markets expects the contract will generate about $138 million in “annual high-margin revenue” for each firm.

To complete the work, each of the station’s reactors will be separately taken offline and rebuilt over about three years. The first reactor is slated to go offline at the end of 2016, and the entire project is expected to take approximately 10 years to complete.