The five-year electric vehicle plan includes the Ford Focus and Nissan Leaf and will save $500,000 in fuel and two million pounds of carbon dioxide emissions 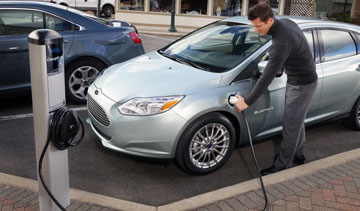 Ford has launched production of its Focus Electric model in Germany, marking the first full-electric vehicle the automaker has built in Europe. PHOTO Ford

SAN FRANCISCO—San Francisco Bay Area cities, counties and water agencies have joined forces in one of the largest single government purchases of all-electric vehicles in the country.

Six cities, two counties and two water agencies on July 8 partnered to buy 90 electric vehicles with the help of a $2.8 million grant from the Metropolitan Transportation Commission, a regional transportation agency.

The vehicles will save more than $500,000 in fuel costs and about two million pounds of carbon dioxide emissions over five years, Bay Area Climate Collaborative executive director Rafael Reyes said.

The collaborative—a public-private partnership started by three Bay Area mayors—developed the proposal for funding that was submitted to the Metropolitan Transportation Commission.

“The Bay Area is clearly in a leadership role here,” Reyes said.

The vehicles include the Ford Focus and the Nissan Leaf. The total cost was $5 million, with the rest of the money coming from funds set aside by the governments and agencies to buy new vehicles.

The all-electric vehicles are a small part of the cities, counties and water agencies’ overall fleets, but Reyes said the purchases shows what can be done.