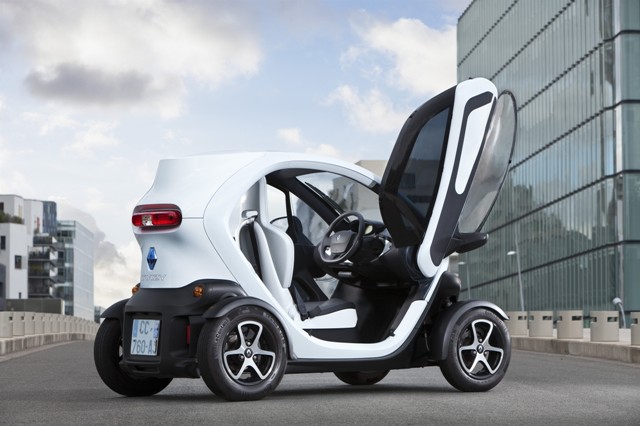 After being certified by Transport Canada as a low-speed vehicle in March, the Twizy two-seater will make its Canadian debut later this year. PHOTO: Renault

With the help of Quebec electric infrastructure firm Azra, which plans to invest $40 million to build 2,000 charging stations across Canada over the next 18 months, Renault will roll out its miniature electric vehicle that straddles the line between car and moped.

“The fact that Renault has chosen a Québec company to market its electric car in Canada speaks volumes about our leadership in this area,” Daoust said.

Using the $40 million investment, Azra plans to add 2,000 charging stations—each housing four separate charge points, or plugs—over the next year and half. The company said the stations will be installed at private office buildings, shopping malls and other convenient locations across Canada—though it’s still working on determining how many stations it will build in each province.

The new charging infrastructure will support the roll-out of the Renault’s fully-electric Twizy, which has gained notoriety in Europe for its unique appearance and certain regional classifications that allow teenagers to legally take the wheel.

The small vehicle, which was certified for use in Canada by Transport Canada in March, will be available for a $99 per month lease—a figure that includes registration costs and insurance. The offering will be limited almost entirely to city-dwellers, however, as the vehicle will top out at 40 km/h to adhere to Transport Canada’s low-speed vehicle certification category. This classification is similar to several regions of Europe, where the vehicle operates under a moped license.

The Twizy sports a 6.1 kWh lithium-ion battery and a range of about 100 kilometres.