Dianne Saxe says province has taken significant strides to clean up the electrical grid, but has not reined in transport fuel or natural gas usage 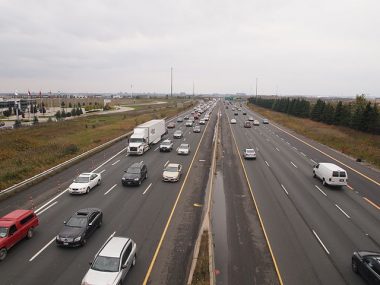 Province’s environmental commissioner says transportation fuel and natural gas make up the majority of energy use in the province. PHOTO: Ryan Stubbs, via Wikimedia Commons

TORONTO—Ontario’s energy conservation strategy is “lopsided,” the environmental commissioner said May 31, just days ahead of the release of the Liberal government’s climate change action plan.

Dianne Saxe said in a report that Ontario has invested heavily in conserving electricity, but it’s the smallest and cleanest of the province’s major energy sources.

Electricity consumption has fallen six per cent since 2007, and since the last coal-fired plant was closed in 2014 that power has been much cleaner, but electricity only accounts for 20 per cent of Ontario’s energy, she said.

Meanwhile, transportation fuel—primarily gasoline and diesel—and natural gas, together make up about 73 per cent of Ontario’s energy use. Ontarians are investing less than 10 per cent on conserving natural gas than they are on electricity, she said.

“It is therefore no surprise that other than coal, our total use of fossil fuels has gone up since 2007,” she said. “We depend on fossil fuels for more than 80 per cent of our energy supply.”

Saxe also said if broader public service buildings were more energy efficient, Ontario could save $450 million and one megatonne of greenhouse gas emissions every year.

Saxe admitted many of the issues she raised in her report will likely be addressed by the government’s climate change action plan, which the premier has said will be made public by June 9.

A draft version of the plan reportedly said the government would spend $3.8 billion on grants, rebates and subsidies to retrofit buildings and move them off natural gas and onto geothermal, solar or other forms of energy. The plan would require that all new homes built in Ontario in 2030 or later be heated without the use of fossil fuels.

It also reportedly sets a target of having 12 per cent of all new vehicle sales be electric cars and trucks by 2025, or about 1.7 million vehicles.

“We have a very, very low level of electric penetration here right now,” she said. “We’re very late getting to the party in terms of trying to improve.”

But Ontario is in a good position to electrify transportation, Saxe said.

“If we’re serious about it we’ve got an opportunity to catch the wave now,” she said. “I think it would also be very helpful if the government were to lead the way. As I indicate in the report, the government promised to buy 500 electric vehicles and so far they’re at 70—and 14 of those are essentially golf carts.”

The government did not consult Saxe while drafting its climate change action plan, she added.

A spokesman for Environment Minister Bob Chiarelli said Ontario will “remain focused on conserving power and reducing our demand.”