by Yuri Kageyama And Tom Krishner, The Canadian Press  September 6, 2017

The redesigned Leaf will sell for about US$5,000 cheaper than its prime competitors. But the new Nissan won't match the 200-mile range of GM's Bolt or Tesla's Model 3, making some analysts skeptical it can compete 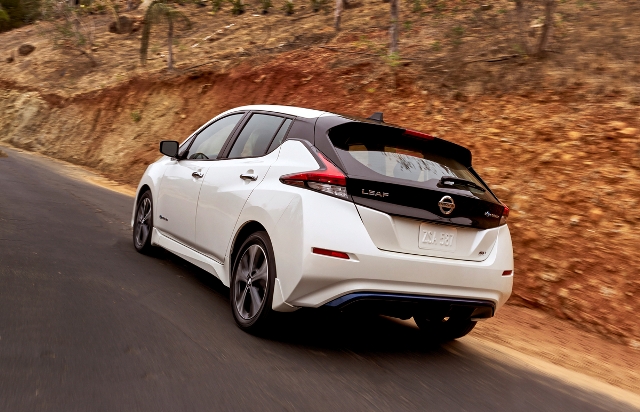 The new Leaf travels farther and is cheaper than its predecessor, but the key remains attracting new customers. PHOTO: Nissan

CHIBA, Japan—Nissan’s new Leaf electric car will go farther on a charge and has a new type of drive technology and the possibility of single-pedal driving. It will also be cheaper, though the world’s top-selling electric car still won’t match the driving range of its prime competitors.

The zero-emissions vehicle—which Japanese automaker Nissan Motor Co. unveiled in the U.S. late Sept. 5 and in a Tokyo suburb Wednesday—promises a travel range of about 400 kilometres in Japanese driving conditions or 150 miles in the U.S., before needing another charge. The company is characterizing it as an approximate 40 per cent improvement from up to 280 kilometres or 107 miles for Leaf models on sale now. The distances vary by country because driving conditions and measuring standards are different. The range also depends on what other features are being used such as the car’s heater.

Both Tesla’s Model 3 and the Chevrolet Bolt can travel over 200 miles (322 kilometres) between charging stations. The 200-mile mark is considered by many industry experts as the range needed to ease driver fears that they’ll run out of juice short of their destination.

A Leaf with over 200 miles of range likely is coming for the 2019 model year, but it will cost more, Maragno said.

The restyled 2018 Leaf is lower and more sculpted than its bulbous predecessor, and Maragno said it also comes with new features that should attract new buyers. The base model S comes standard with automatic emergency braking, and more expensive model lines have an optional semi-autonomous driving feature that keeps the car centred in its lane and stops it from hitting objects in front of it. Also standard is a 38 per cent increase in power to 147 horsepower. The car can be operated in one-pedal mode that automatically slows or stops the car when the driver eases up on the accelerator, but it still includes a brake pedal, especially for emergencies.

Research has shown that Leaf buyers wanted a car below the $30,000 starting price, but they also wanted more features, Maragno said. Even with the added features, Nissan lowered the price by $690 from the 2017 model, making it attractive to current owners, he said. “For me, it’s important for us to focus on the loyalty piece. You don’t want to alienate those people,” he said.

Nissan is waiting to introduce the 200-mile model because it takes longer to develop, Maragno said. And while that range is important in the U.S., he noted it is not as significant in other markets.

In the gala rolling out event in Japan, Nissan Executive Vice-President Daniele Schillaci stressed that the Leaf was superior to Tesla offerings because Nissan had decades of experience making cars, and had more expertise on safety and other convenience features for cars.

“The new Leaf is not just an EV,” said Schillaci, who heads the zero-emissions vehicle program at Nissan.

The Leaf is the world’s bestselling electric vehicle, selling a cumulative nearly 300,000 so far.

Some analysts are more skeptical about electric cars’ appeal to the broader market, noting the biggest obstacle is their limited driving range per charge. Several breakthroughs in battery technology are likely needed before they become affordable and practical for regular consumers.

Koichi Sugimoto, analyst at Mitsubishi UFJ Morgan Stanley Securities Co. in Tokyo, says many automakers are selling green models because of tightening emissions regulations, especially in Europe and California, rather than because of what he called “natural sales growth.”

“There really is no outstanding attractive quality about an electric vehicle,” he said, noting drawbacks such as finding charging stations.

Nissan said Japan has 28,000 charging stations and more are being added.

The remodeled Leaf also gets a 6.6-kilowatt onboard charging system that draws more electricity from a 240-volt charging outlet, allowing the Leaf to go from empty to fully charged in about 7.5 hours, Maragno said.

On the day of the Leaf rollout, General Motors announced that the Bolt is now available in all 50 U.S. states. The company had been phasing in the car starting on the West Coast.

Other Japanese automakers have not been as bullish on electric vehicles. Toyota Motor Corp. has been more aggressive about gas-electric hybrids, exemplified in its hit Prius model, and is expanding to plug-in hybrids, as well as hydrogen-powered vehicles.

But the Leaf is a core product for Yokohama-based Nissan, said Chief Executive Hiroto Saikawa.

He said more Nissan models will get “electrified,” in the next decade and beyond, as gas engine models increasingly switch to electric versions. Automakers will also have to change to meet new kinds of competition, forming partnerships and acquiring software and connectivity capabilities, not just sticking with traditional engineering.

Although it remains unclear which company may emerge the winner in electric vehicles, many see that switch as inevitable. Tony Seba, an expert on technological evolutions, who teaches at Stanford University, says the gas engine vehicles may go the way of film cameras before the advent of digital photography and old-style phones before the arrival of smartphones.

“Automakers still have the ability to compete, but it’s going to be a totally different world,” he said.