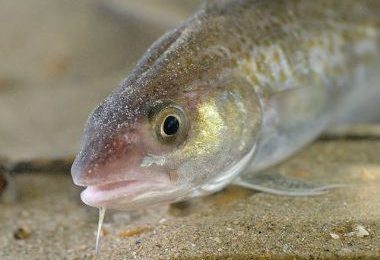 A young Atlantic cod. The species’ population in the northwest Atlantic was pushed to the breaking point in the early ’90s. PHOTO: Hans Hillewaert, via Wikimedia Commons

ST. JOHN’S—The population of Atlantic cod off the northern coast of Newfoundland is finally headed in the right direction.

Nearly 25 years after the federal government declared a moratorium on cod fishing, stocks of the predatory fish—once the best-represented species in Canadian waters—are making a recovery.

According to a new SAI Global assessment, made on behalf of World Wide Fund-Canada and the Fish, Food and Allied Workers Union, stocks have grown significantly since 2006, though they remain well below their levels during the fishery’s heyday.

“[We’re] pleased to see that northern cod is showing quite spectacular signs of recovery,” David Miller, president and CEO of WWF-Canada, said. “There is a lot of work that needs to be done, but with the stock health improvements we’ve seen so far, we are confident that the comprehensive Fisheries Improvement Project we’re undertaking along with FFAW-Unifor and other partners will help build on these positive trends.”

Launched last year, the fishery improvement project (FIP) aims to help stocks of cod off Newfoundland’s northeast coast recover, as well as eventually establish a sustainable fishery that will operate under the Marine Stewardship Council’s (MSC) benchmark standard. Along with WWF-Canada and FFAW-Unifor, the Newfoundland and Labrador Department of Fisheries and Aquaculture as well as Oceans and Fisheries Canada are supporting the project.

If successful, the environmental work would not only revive the threatened species, but also allow Newfoundland’s once-vibrant fishing industry to regain a portion of its status. The federal government’s moratorium on cod fishing devastated the province’s economy in 1992, putting as many as 30,000 people out of work.

“The increase in productivity of this stock in recent years suggests that it’s not too early to start thinking about how a future fishery should be pursued,” Keith Sullivan, president of the FFAW-Unifor for Newfoundland and Labrador, said.

The FIP plan is set to run through 2020, at which point the groups hope “conditions will be favorable” for the area to enter a full assessment for certification under the MSC’s guidelines.

While the assessment shows the fishery is moving in the right direction, it cautioned the cod population still has a long way to go before a sustainable fishery could be established.