LED lighting may be contributing to worsening light pollution

Energy saving tech may be brightening the skies of cities worldwide 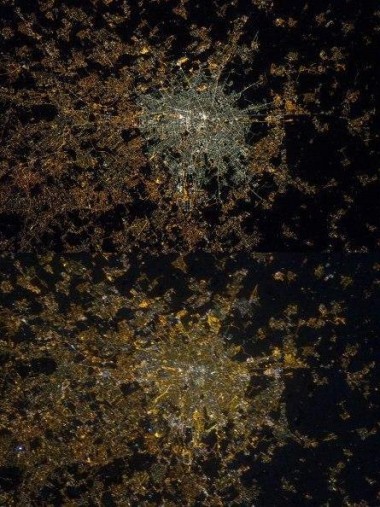 Two images of Milan seen from space. The top image shows the city centre in 2015 after LED installation while the bottom image shows less intense light in 2012 before LEDs were installed outside. PHOTO: NASA/ESA

PARIS—LED lighting has the potential to save 348 terawatts of electricity worldwide by 2027, according to the U.S. Department of Energy and as much as US$30 billion in energy costs at today’s prices. The highly energy efficient technology uses 75 per cent less energy than traditional incandescents and lasts up to 25 times longer. But LEDs are also contributing to growing light pollution in cities worldwide, according to research conducted by the International Astronomical Union.

The association has begun work on a new study designed to produce a global colour map of the world at night. The project uses images taken by astronauts on the International Space Station as well as over 130,000 of the ISS’s high resolution images and geo-references them.

With the wide-scale adoption of LEDs progressing, with many individuals and even entire cities around the world transitioning to LED lighting both inside and outdoors, the study provides an overview of how the technology is changing the night’s sky.

“LED streetlights have been installed or announced for installation in several large cities as well as smaller cities throughout the world. LED street lights make light pollution — such as sky glow — significantly worse, as they emit more blue and green light than the high-pressure sodium lights that they typically replace,” the association said.

Though LED lights are often hailed as environmentally beneficial, drastically cutting energy costs, increased light pollution, which has been linked to negative health effects such as sleep loss and depression, shows one downside to the technology.