Bruce County facility will power up to 70,000 homes each year 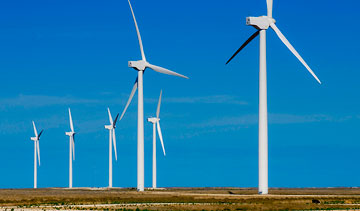 The towers and blades for the 91 Siemens 2.3 MW turbines were sourced to Windsor and Tillsonburg, Ont. respectively. PHOTO Pattern Energy

TORONTO—Not far from the shores of Lake Huron, 91 wind turbines have begun pumping 180 megawatts of clean energy into the Ontario’s power grid.

“Armow Wind is a great example of how Ontario is changing the future of electricity,” Mike Garland, the CEO of Pattern Development, said. “Armow Wind is a project that produces clean, renewable energy and that was built by Ontario workers with Ontario-made wind turbine components.”

The project employed 350 workers on-site during peak construction, while more than 750 Ontario manufacturers worked to build the project’s components. The towers for the 91 Siemens 2.3 MW turbines were manufactured in Windsor, while workers in Tillsonburg built the 273 blades.

Armow Wind is operating under a 20-year power purchase agreement with the Independent Electricity System Operator.