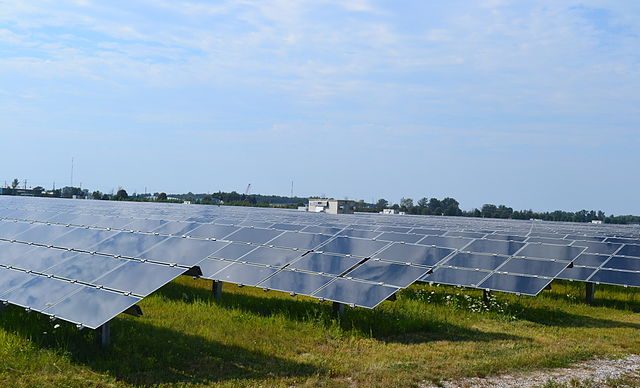 The Alberta Electric System Operator says 21 solar projects that would generate a total of 681 MW have been proposed since Sept. 1

CALGARY—Solar power projects that could jolt Alberta’s electricity grid with the addition of hundreds of megawatts of renewable power are being lined up in anticipation of incentives from the provincial NDP government.

According to the Alberta Electric System Operator, 21 proposed solar projects generating a total of 681 MW—about 60 times the existing provincial solar capacity—have been registered on its system access service request list as of Sept. 1.

Two projects have jumped to the next step and are described in applications for construction approval by the Alberta Utilities Commission. The larger of the two, the proposed 77.5-MW Vulcan Solar Project in southern Alberta, would be the largest solar power project in Western Canada.

But renewable energy developer EDF EN Canada says going ahead with its Vulcan project will depend on what Alberta does in the next few months as it moves to phase out coal-fired power by 2030 and simultaneously triple renewable energy’s share of the power supply to 30 per cent.

“The price of power today is just too low for anybody to make an investment decision and earn a reasonable return over the life of the asset,” said its development manager David Warner.

“What we’re looking for is either a change in that spot price or some sort of additional revenue stream that can be made available to the project to help it achieve a tipping point to allow us to invest the money to allow the project to go forward.”

On Wednesday, Alberta Environment Minister Shannon Phillips said an auction-style call will be announced in November.

Details on what support will look like haven’t been ironed out but Phillips said it could come in the form of government purchases of renewable energy credits from the projects on long-term contracts, or through “contract-for-differences” agreements that would top-up developer revenues when prices fall.

John Gorman, president and CEO of the Canadian Solar Industries Association, said Alberta has about 11 MW of solar power installed now, mainly in the form of small installations on rooftops, but that will change quickly with the right signal from government.

“Many players in the industry, both domestic and international, are waiting for a signal from the Alberta government as to whether they will proceed,” he said.

Warner estimated that EDF EN Canada, a Toronto-based subsidiary of Paris-based utility Electricite de France, has spent more than $100,000 over the past two years to prepare its solar project for its AUC application.

He said the $150-million development would generate power from nearly 300,000 photovoltaic panels installed on racks designed to follow the sun on land occupied by the existing Blackspring Ridge Wind Power Project in Vulcan County, Alta. The solar power and wind power would both flow through the Blackspring Ridge substation.

The 300-MW Blackspring Ridge project, containing 166 wind turbines, was constructed by EDF EN Canada in 2014 for about $600 million. It is equally owned by EDF EN and Enbridge Inc. and produces power for the Alberta grid as well as renewable energy credits it sells through a long-term contract to a California utility.

Warner pointed out combining the solar and wind projects will help ensure a more consistent stream of power because winds tend to blow more reliably at night than during the day, and solar collection is possible only when the sun is out.

The EDF EN solar project is to be constructed in two phases, pending approval. The first would provide 55 MW, enough energy to power 8,800 homes, when built next year. A 22.5-MW addition in 2018 would provide enough power for another 3,600 homes.

“The proposed solar projects that have been submitted to the AESO are in the very preliminary stages,” Fisher said in an email.

She added no project costs have been established, but said that if investment in the projects is approved the resulting power would be sold into the Alberta grid.

Alberta has about 1,500 MW of wind power installed, according to Alberta Energy, about nine per cent of total capacity of 16,300 MW as of June.

Sara Hastings-Simons of the Pembina Institute environmental group said technological advances are cutting what were previously high costs for solar power and allowing it to catch up to the more established wind power industry.