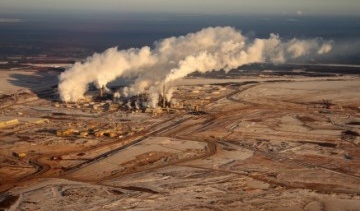 Carr and Environment Minister Catherine McKenna announced Wednesday that all resource projects—and specifically the hotly contested Trans Mountain and Energy East pipelines—will be assessed in part on the greenhouse gas emissions produced “upstream” in the extraction and processing of the oil they propose to carry.

The government will also appoint a ministerial adviser who will consult with indigenous communities along the proposed pipeline routes.

The new reviews will be carried out apart from and in addition to deliberations by the National Energy Board, which under the previous Conservative government was given the power to do environmental assessments and public consultations under circumscribed timelines.

“We believe it is important and, in fact, essential to rebuild Canadians’ trust in our environmental assessment processes,” McKenna said at a news conference.

“We need to take into account the views and concerns of Canadians, respect the rights and interests of indigenous peoples and support our natural resources sector.”

McKenna said the goal is to make major resource project decisions based on scientific evidence, but political and economic imperatives will clearly be part of the deliberations.

“The government of Canada is free to establish its own review and its own criteria for those reviews in whatever context it chooses,” Carr responded when asked how the various reviews mechanisms will be weighed and assessed.

“And the cabinet ultimately will decide—weighing all the factors that are important to determine the national interest for these major projects.”

The changes are an interim step while the government works out a new project review process after consulting Canadians, a process McKenna said could take years.

The temporary measures will apply to all project assessments, including liquefied natural gas terminals and mining proposals.

But the immediate impact will be on two contentious pipeline projects that are currently dominating headlines: Kinder Morgan’s proposal to twin the Trans Mountain oil pipeline in B.C. and TransCanada’s Energy East project from Alberta to New Brunswick.

NEB hearings on the Trans Mountain project are almost over and the government is extending the deadline for a decision by four months, pushing it to next December.

As for Energy East, the government is extending the project review period by an extra six months and adding three temporary members to the National Energy Board in an effort to do greater public consultation. A decision on the pipeline is not expected before the middle of 2018 under the new timeline.

“We support a strong and clear regulatory framework that helps Canadians see our commitment to building and operating oil and gas pipelines in the safest and most environmentally sound way possible,” he said in an emailed statement.

“TransCanada operates in a highly regulated industry. We will continue to work with all levels of government and our regulators to ensure the continued safe and environmentally sound transportation of our natural resources to market.”

Tim McMillan of the Canadian Association of Petroleum Producers said the industry organization welcomes the Liberal move to clarify the transition rules, but remains concerned about further delays and duplication built into the review process.

“Getting our product to market in a timely fashion is and has been a challenge,” said McMillan.

Environmental groups, which have said Canada can approve no new pipelines if it is serious about meeting its international climate change commitments, applauded Wednesday’s changes—even though the Liberals insist they’re committed to getting Alberta and Saskatchewan crude to tidewater for export.

Conservative MPs were not impressed.

“This is not good news for the natural resources sector,” said Conservative energy critic Candice Bergen, adding it sends a discouraging signal to investors. “This another layer, another process.”

In Edmonton, Alberta Environment Minister Shannon Phillips said the province is behind any process that improves public confidence and bolsters the chances of pipelines getting built.

“Of course we are not interested in unnecessary delays, but the fact of the matter is that we have inherited a (review process) situation that didn’t have the confidence of Canadians,” Phillips said.

“We have done our part to earn that confidence of Canadians,” said Phillips.

“Now the federal government is, (through) this interim solution, attempting to have that honest conversation and ensure that voices are heard so that we can get to a decision on these matters.”